I didn’t know what to expect from the city of Rotterdam. I knew that a friend of a friend had studied in university there, and I knew that a classmate of mine had gone with parents and felt like there wasn’t much to do. However, I took the chance to join another classmate, Lisa, who was going to visit Rotterdam along with her friend Line who was here from Paris. Lisa and Line were going to visit a couple of their friends that run a design studio.

I’m glad I joined, because I loved Rotterdam! In some ways, it reminded me of some sort of a mix between Amsterdam and Brooklyn. Like Amsterdam, there were lots of canals, a beautiful quality of light, and plenty of boats. Like Brooklyn, there were lots of cool small shops to see, plus quite a few once-industrial buildings that have been converted (in the case of our visit to Template) beautiful workplaces and studios. In a way all its own, Rotterdam adds some surprising, unique architecture into the mix.

On the way from the train station to the design studio, we couldn’t resist stopping into this welcoming plant shop, Stek de Stadstuinwinkel. 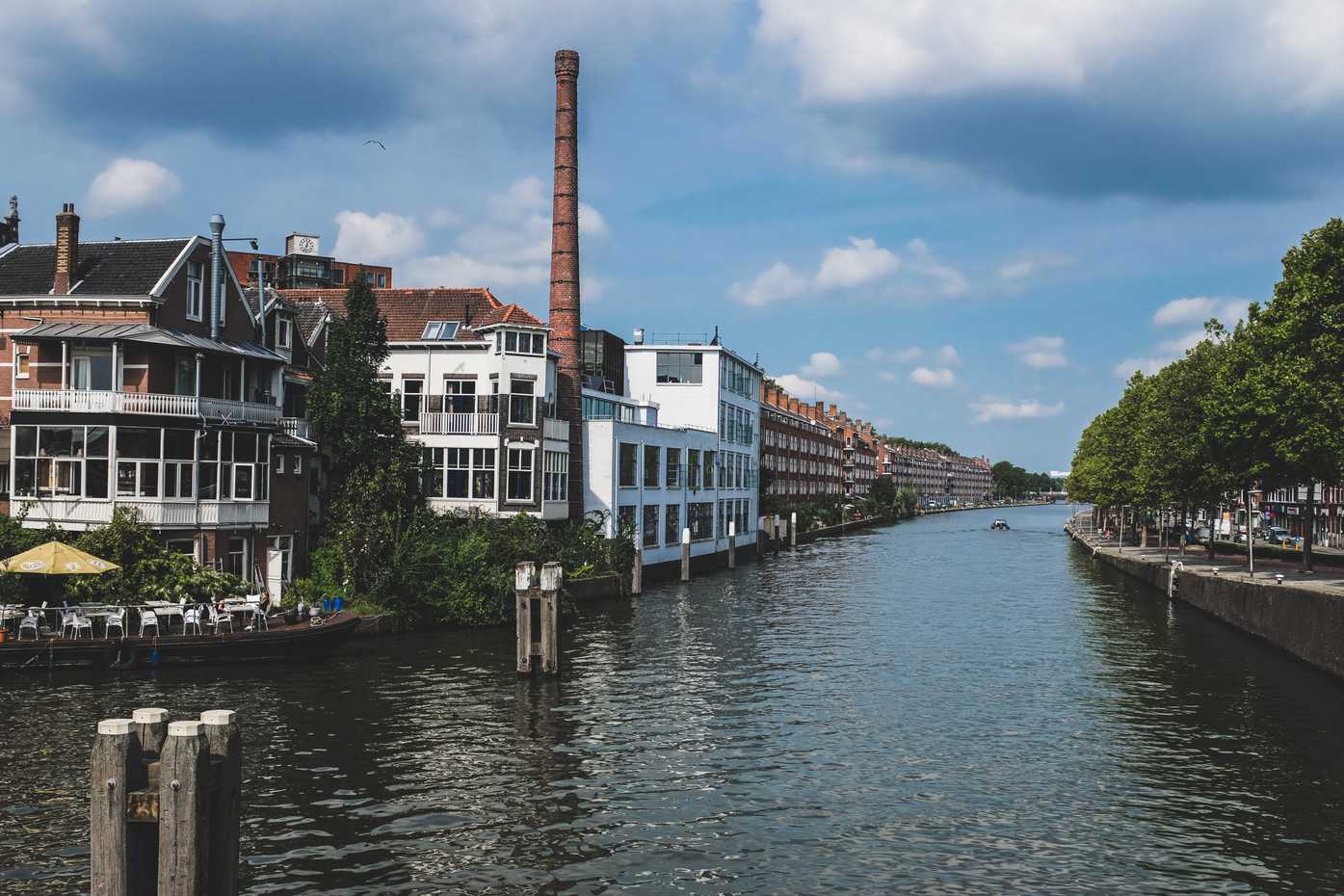 The design studio we were visiting, Template, was situated alongside a canal in big building that seemed to have been a garment or textiles factory at one time. Today, it’s painted all-white on the inside, and has a huge windows that make it feel a bit like a greenhouse. This is the stuff of designer dreams. 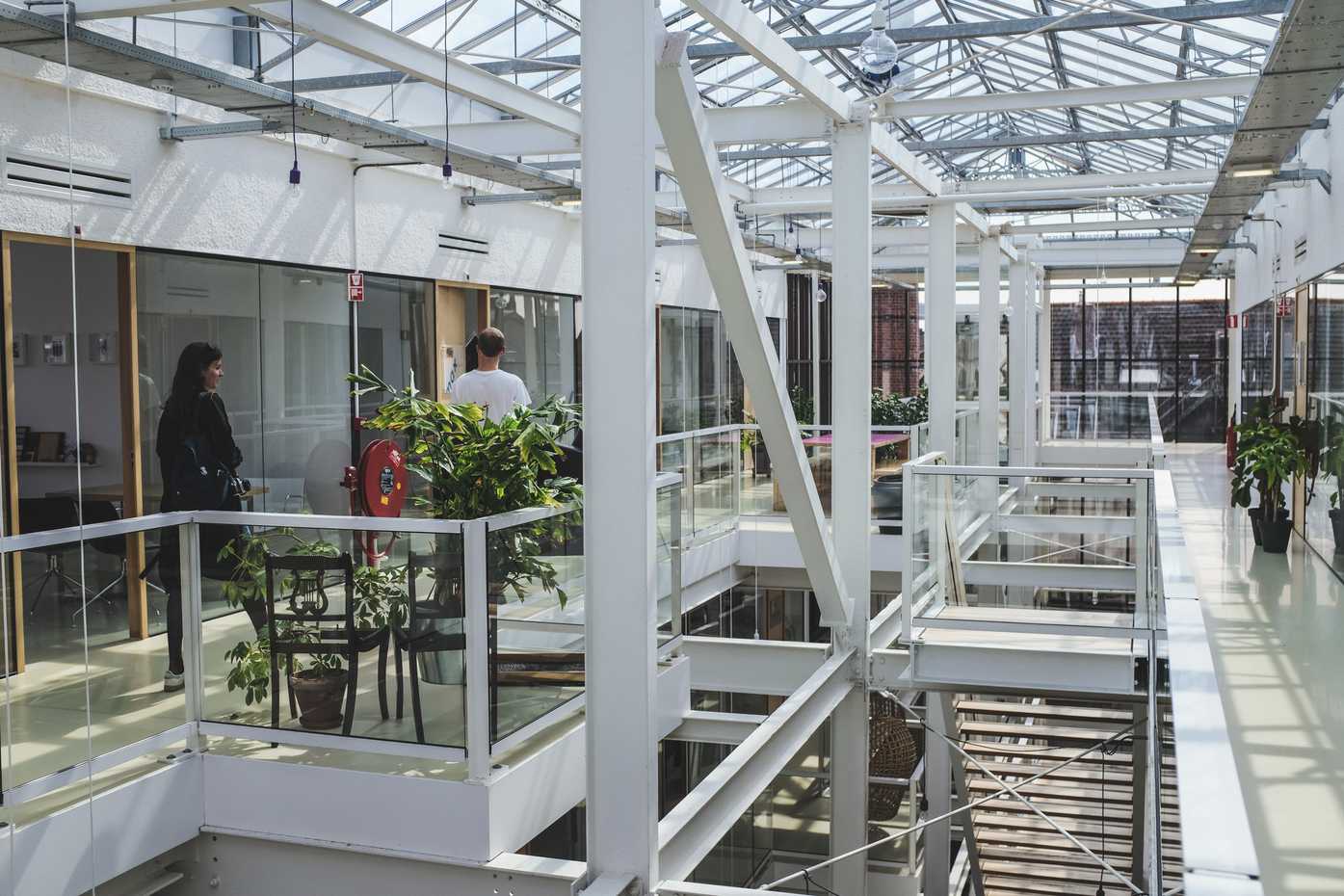 We had a wonderful picnic on an outside deck. Sadly, I don’t have a photo of both members of the studio. Above, from left, is Lisa, Line, and Lasse (not pictured is Marlon, the second partner).

After lunch, we set off to explore more of the city. We walked south, towards the harbor, taking a long route on the way to the Erasmus Bridge and Hotel New York. Along the way, there were beautiful snippets of life in a city along the water.

After a pleasant but long walk (our feet were definitely starting to hurt by the end), we made it across the Erasmus Bridge, and ventured up to a swanky rooftop bar to get a good view – then showed ourselves out, not wanting to but overpriced beer that afternoon.

We continued a little ways on to the Hotel New York, which was the former headquarters for the Holland Amerila Lijn, which provided 15-day voyages from Holland to New York, starting in 1872, carrying 400,000 people to the Americas in its first 25 years (wikipedia).

At the bottom of the hotel, there are multiple bars and a beautiful public pavilion, which included this scene of a wedding photographer.

Did you know that Rotterdam has water taxis – speedboats that zoom around its harbor to deliver passengers? It was a good surprise for me! For 4€, we saved ourselves maybe 30 minutes of walking. It was well worth it, for the fun alone of seeing Rotterdam from the water.

After Hotel New York, we headed towards the Cube Houses. First, though, we needed something to eat, so we stopped into the Rotterdam Market Hall. This hall was a pretty amazing sight: the shell is an apartment building… 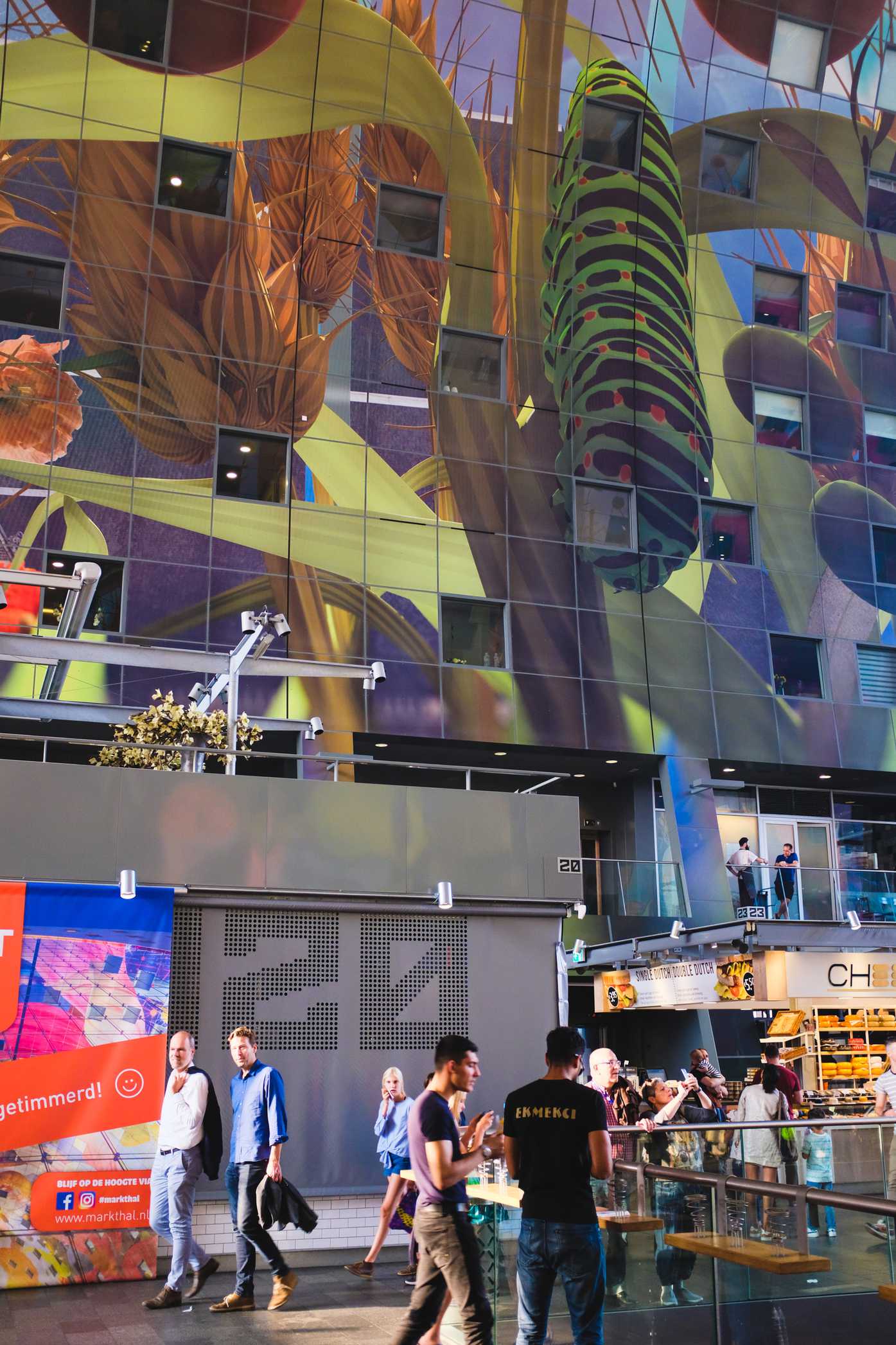 …and the interior contains a food market on the ground, with a soaring ceiling of an insane, super-saturated, massive collage of plants and bugs. It was absurd in the best way.

The above building is not especially significant, but it does look like a Tycho album cover.

The Cube Houses are also absurd, and also a spectacle worth seeing. Designed by Piet Blom and built in 1974, these houses are literally huge cubes, balanced on their corners on brick bases. The goal of this construction is for living space to provide a roof for public space below. I found it difficult to accurately capture the environment in a single photo, but the space does provide endless angles for weird and fun photos.

Below the cubes, there are some spaces for small shops.

A Chess Piece Museum! I wish we had made it when they were still open, but even peeking in through the window was entertaining.

Across the street from the Cube Houses, the adjacent building had some quirky, rounded windows, as part of a the kind of medieval form you might see in a Japanese, cartoon-style videogame.

As dusk approached, we made our way back to the Centraal Station, to return to Den Haag.