Orientation at KABK for TypeMedia ’18

Tomorrow is the actual first day of class, but last week we had three days of orientation. Monday, we met the classmates who weren’t here earlier and got some opening remarks. I also joined a group of Art Research students on a walking tour of The Hague, including a park which apparently includes the royal stables. Tuesday, we had a few information sessions in the morning over things like finance and Dutch culture, then took a trip to an otherworldly, man-made beach area called Zandmotor. Wednesday, we were able to pick a couple of workshops to get orientation and safety training, so I got my first lessons in the metal workshop.

I met my whole class! KABK has an amazing mix of students from around the world – the definite majority of the school is from abroad. TypeMedia, the type design program I’ll be in, is even better: there are 12 students, and each one is from a different country. 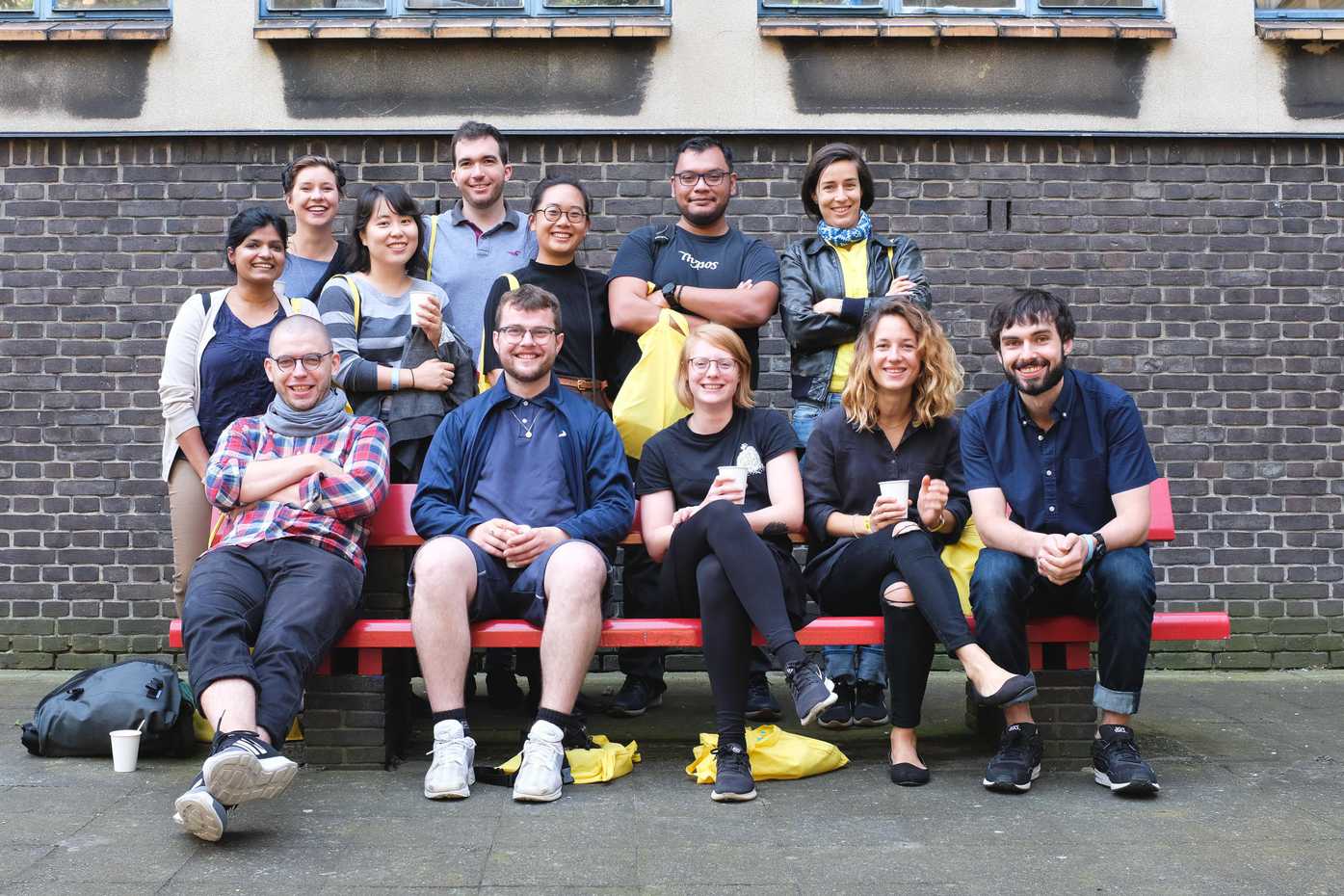 We were all hanging out in a courtyard, waiting for orientation sessions to start, and as soon as we were all there, I asked another KABK student to take our photo. Unfortunately, in setting up that student with my camera, I neglected to suggest that the class arrange symmetrically, and I also neglected to make my hair look not-stupid. Lucky for me, this photo has been embraced by everyone else, and has already gone up on the official TypeMedia Twitter. 🙃 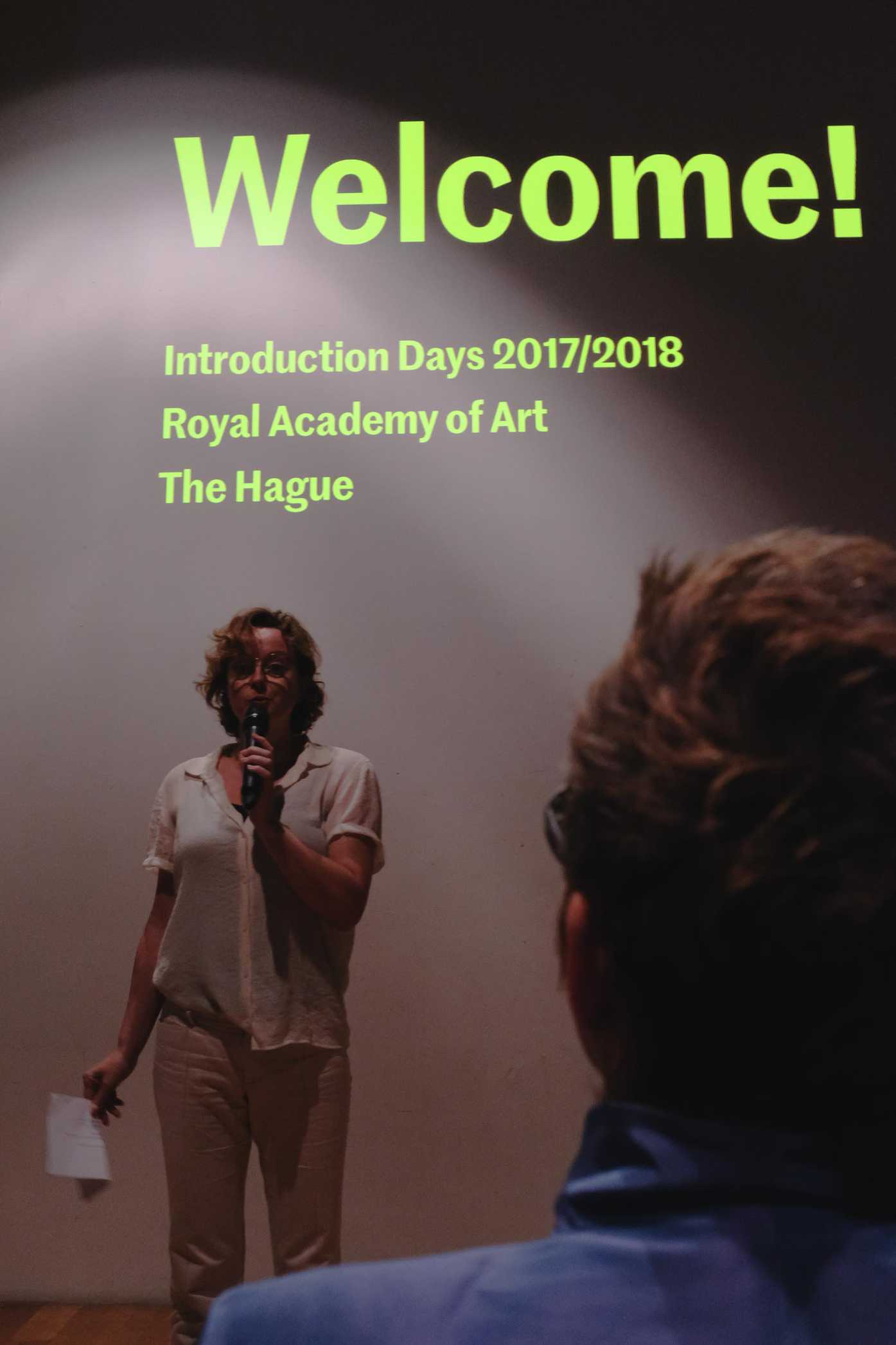 Some opening remarks were had. 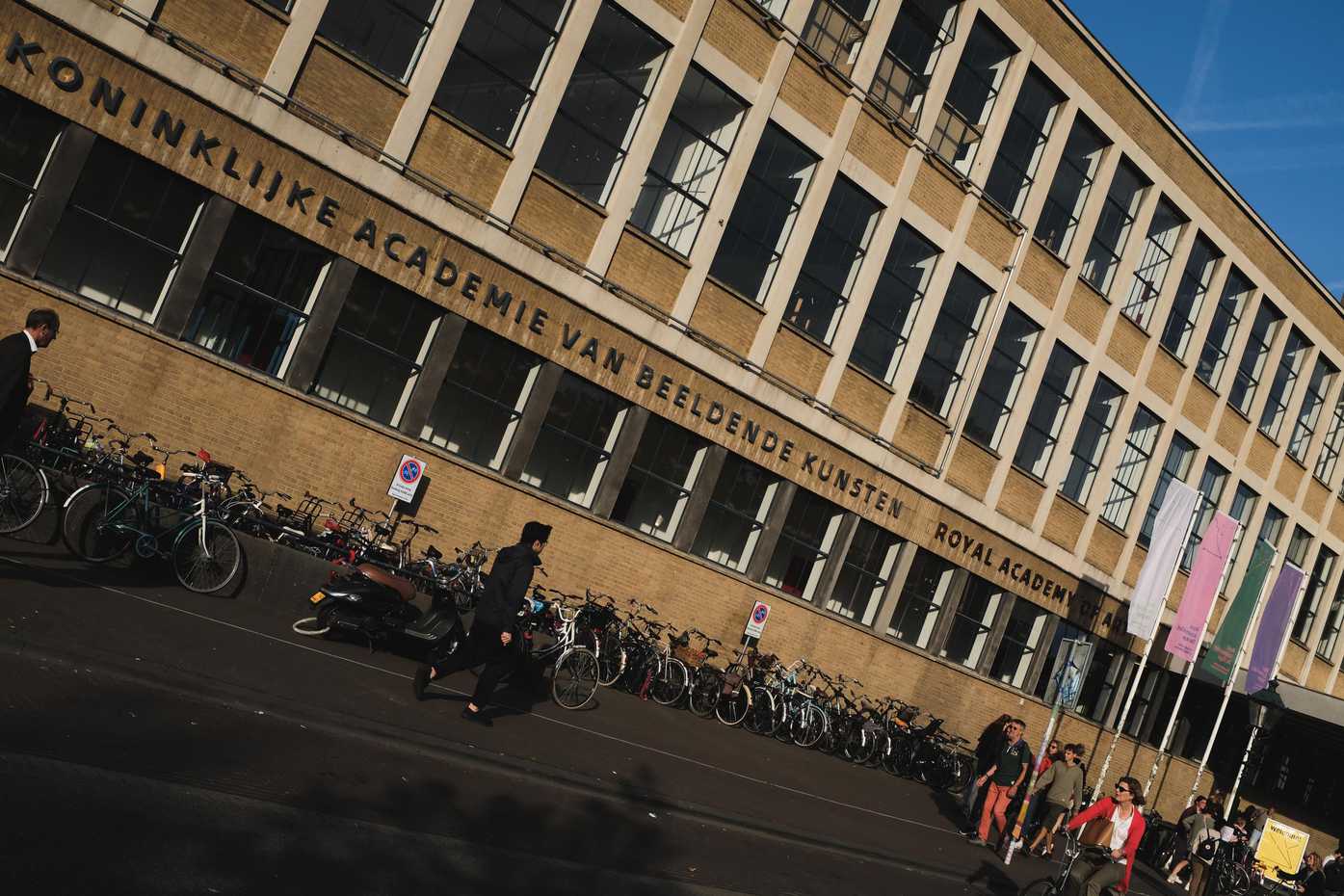 The front of the school. I’ll figure out how to pronounce the name in Dutch at some point… 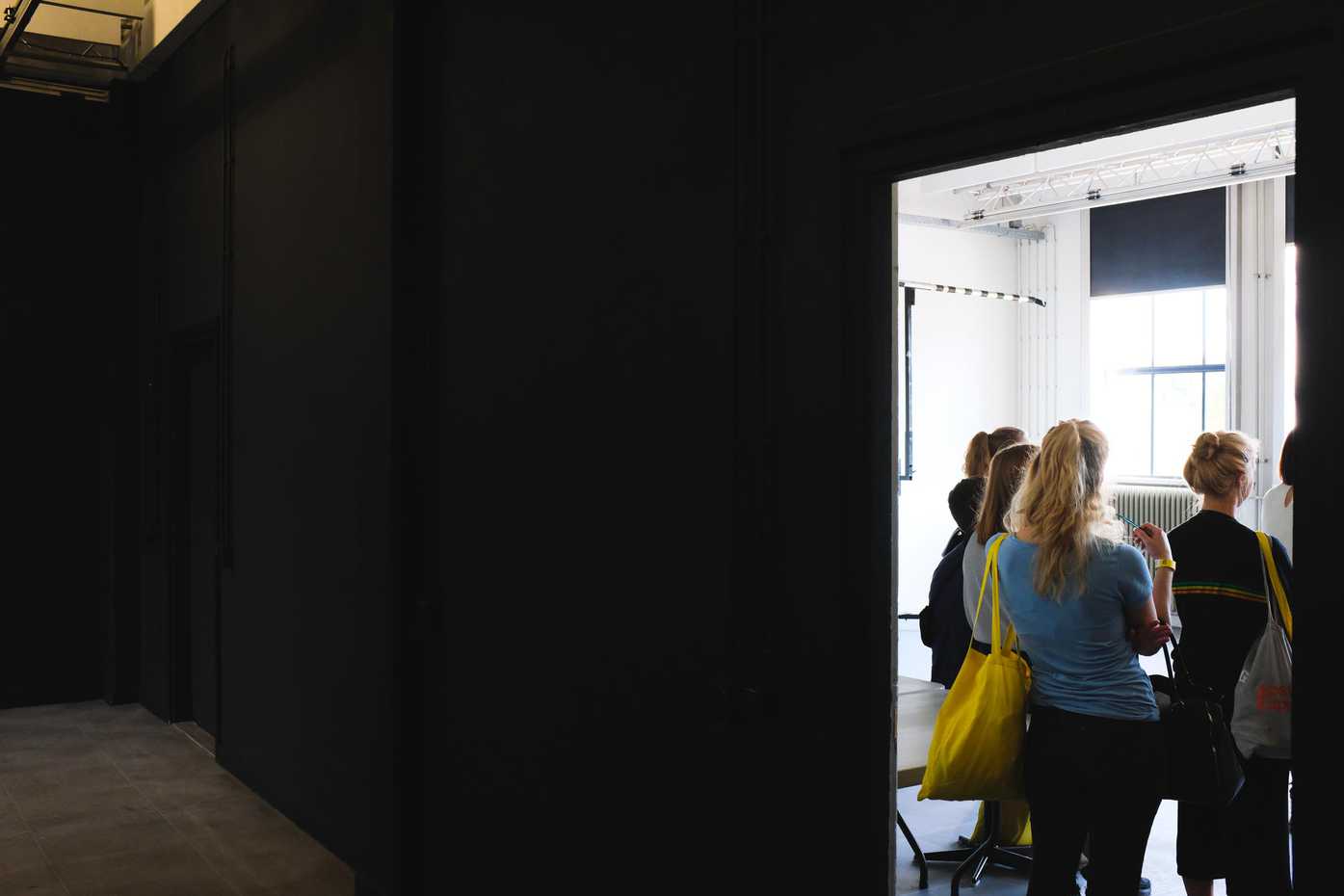 We took a tour of the school to get an awareness of the facilities. Above are the black and white studios for photography. 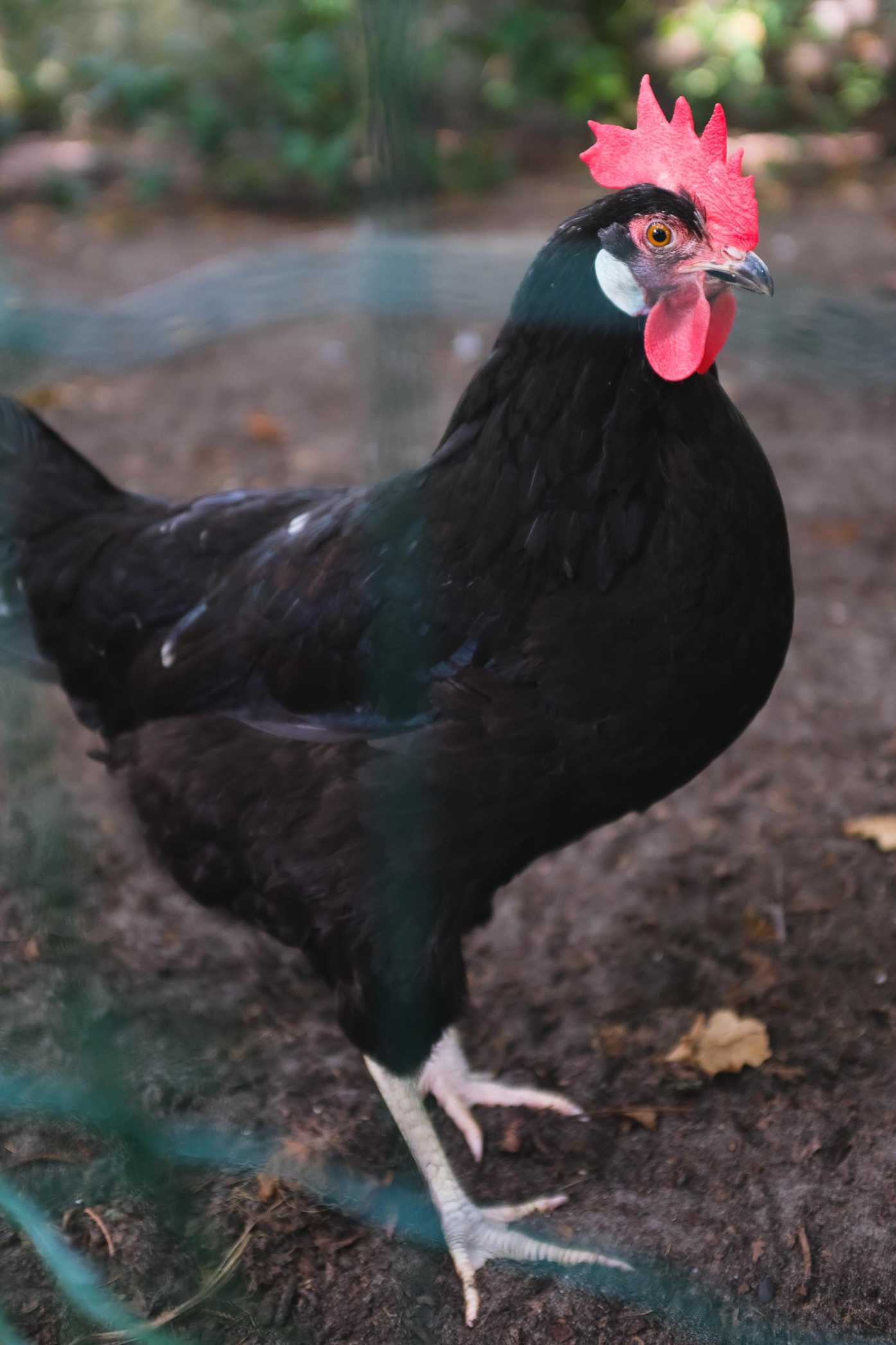 I went on a long walk with some other students, which included a park. One small highlight was a small group of chickens. As you can see, this guy was very handsome.

On this day, we visited a huge manmade beach, plus a monumental piece of art.

The beach was De Zandmotor, a huge amount of sand that has been put onto the coast, with the intent of being distributed along the coastline to counteract erosion.

Being on the Zandmotor felt a bit like being on another planet, or at least on another continent. It was a collassal expanse of sand, so that looking into the distance was a bit like looking at a piece of abstract expressionist artwork – a yellow band of color below a blue band of color. 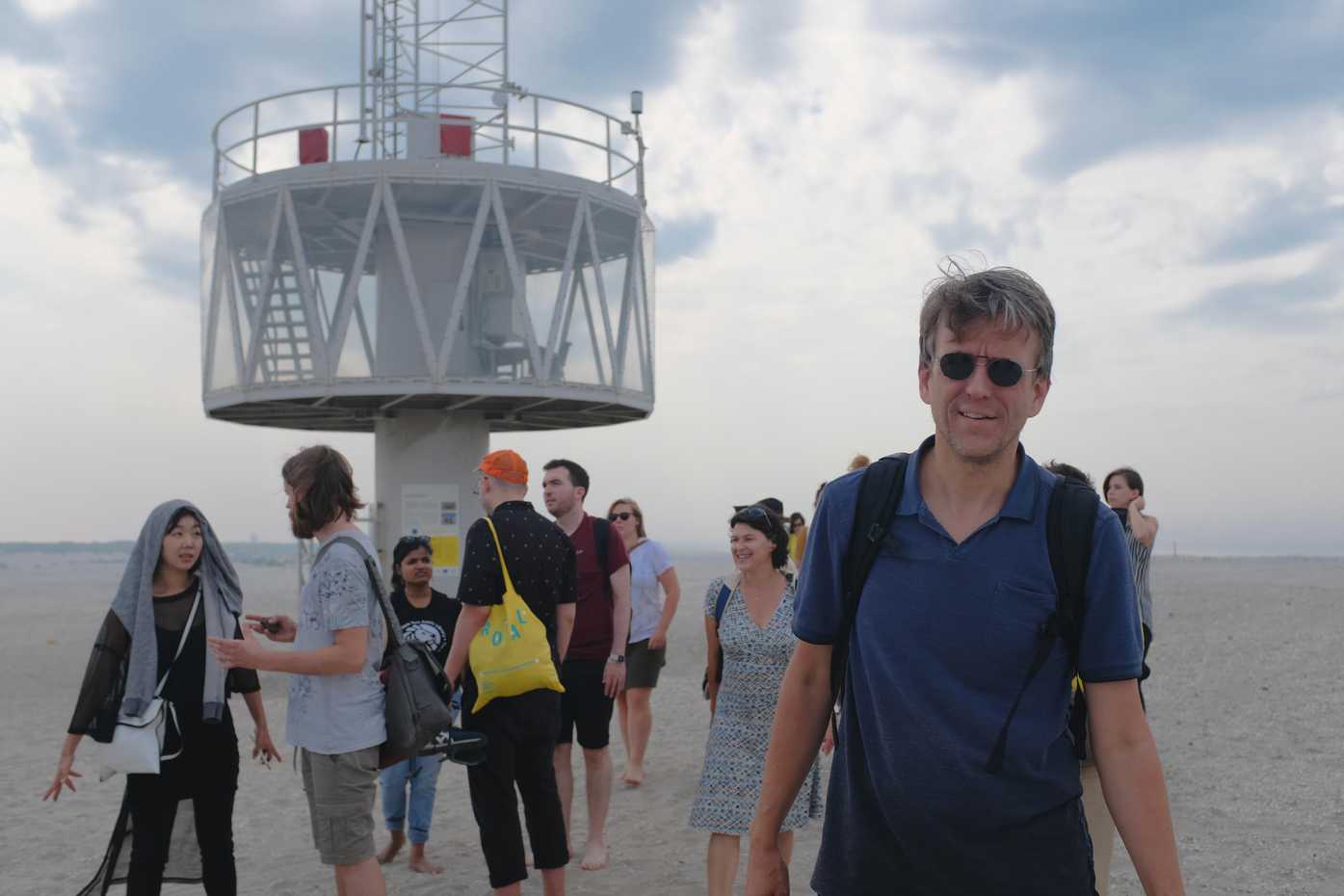 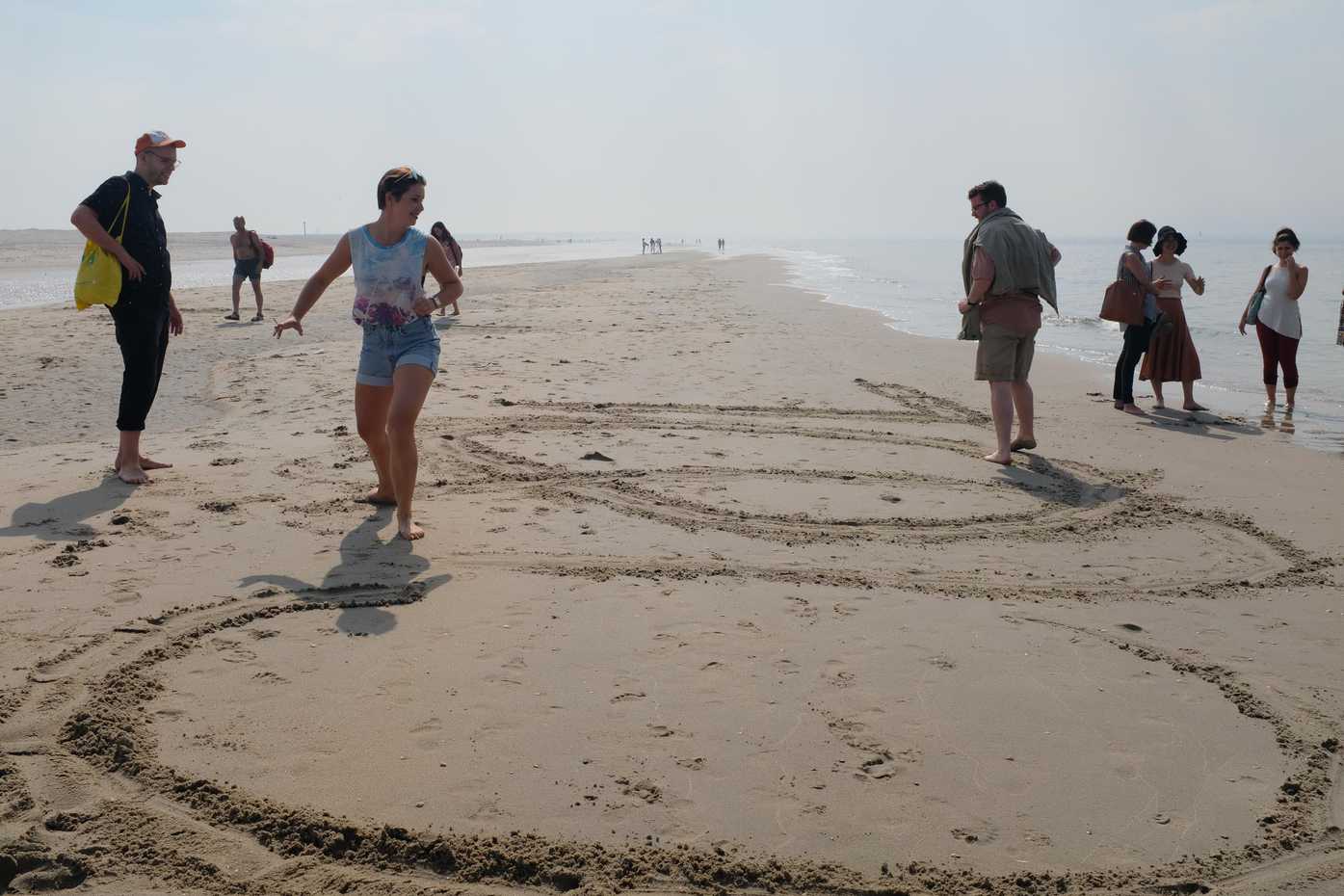 We had been told that this afternoon was a “workshop,” though it ended up having no formal activities. Still, a few of the type classmates decided that they might as well make some letters. 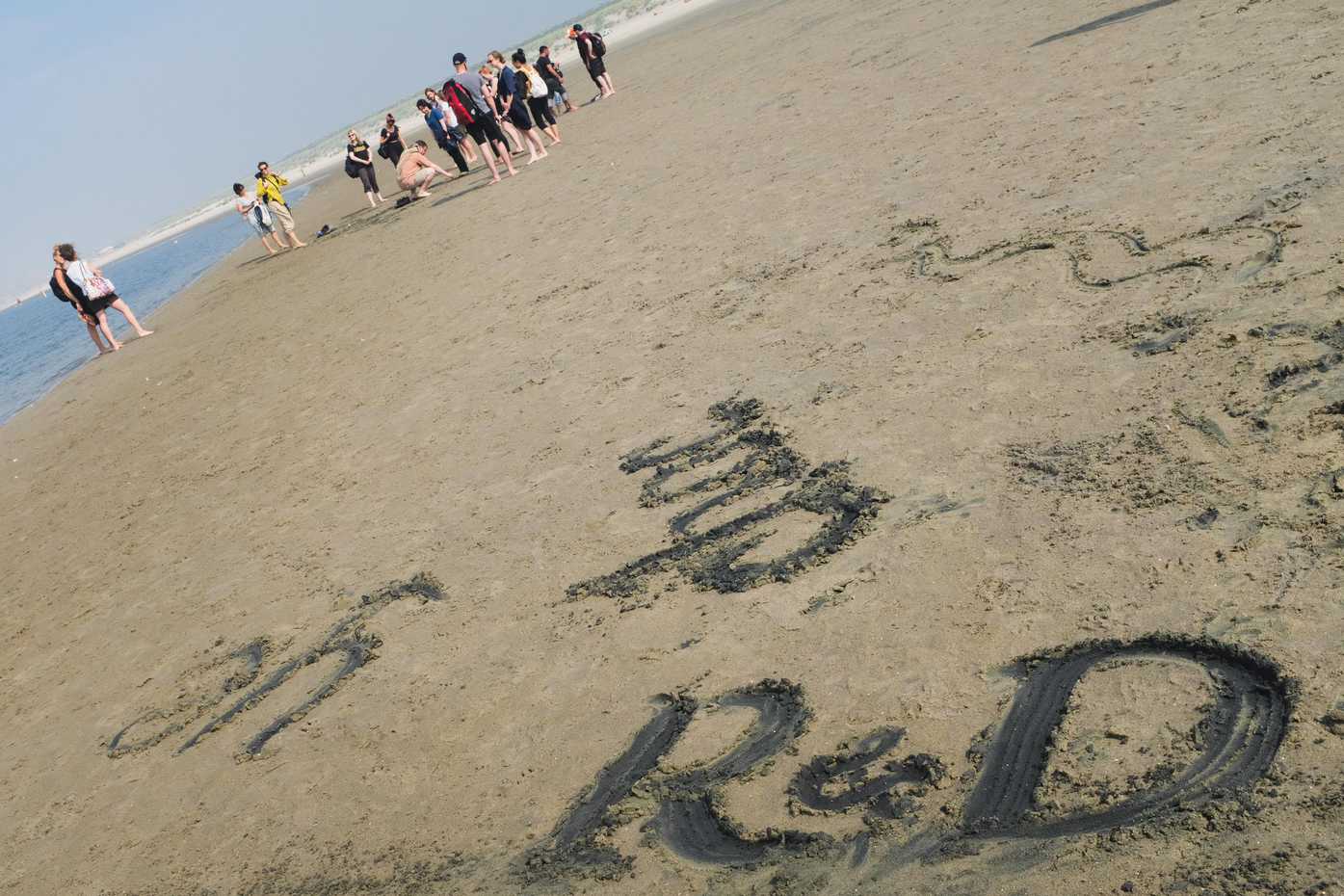 At some areas, black sand was just below yellow sand, making it especially fun to draw with one’s feet.

After the Zandmotor, we visited the Celestial Vault, a work of art by the artist James Turrell. From the official artist statement:

In the dunes of The Hague, where light can have such a tangible presence, Turrell created a place to gaze at the sky: ‘Celestial Vault’ in Kijkduin. At the top of one of the rubble dunes, a bowl in the shape of an ellipse has been built, 30 meters wide and 40 meters long. A wall of earth, approximately 5 meters high encloses the bowl. In order to reach this artificial crater you first climb up the dune on wooden stairs and then walk through a six meter long concrete passageway. The slopes on the inside of the crater have been sown with grass and a monumental natural stone bench is in the middle on which two people can lie back and observe how the sky is a vault. A similar bench is located on a higher dune where a panorama unfolds over the sea, the beach and the flat countryside beyond. In the direction of the horizon, the vault gradually becomes flatter. For Turrell, light and space themselves are the object and one of the points he wants to make is that, during the act of observation, the observer should experience that he/she is observing.

TL;DR: You lie on a bench and look up, and the sky looks like a big dome. 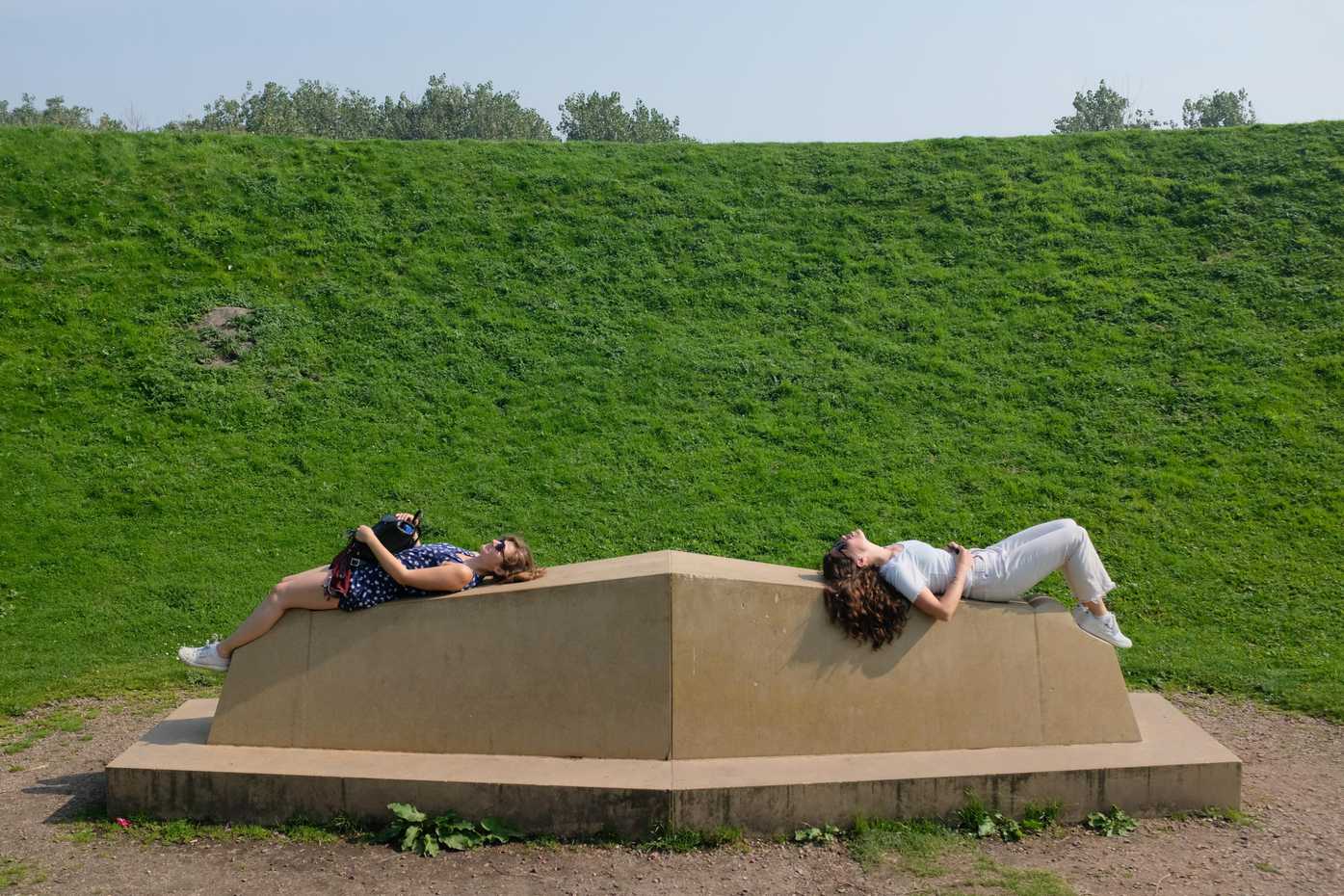 The best part of this attraction, as well, we the views that were so different from everyday life. The vibrance and quantity of green grass and blue sky made me think of the classic Windows XP desktop photo. 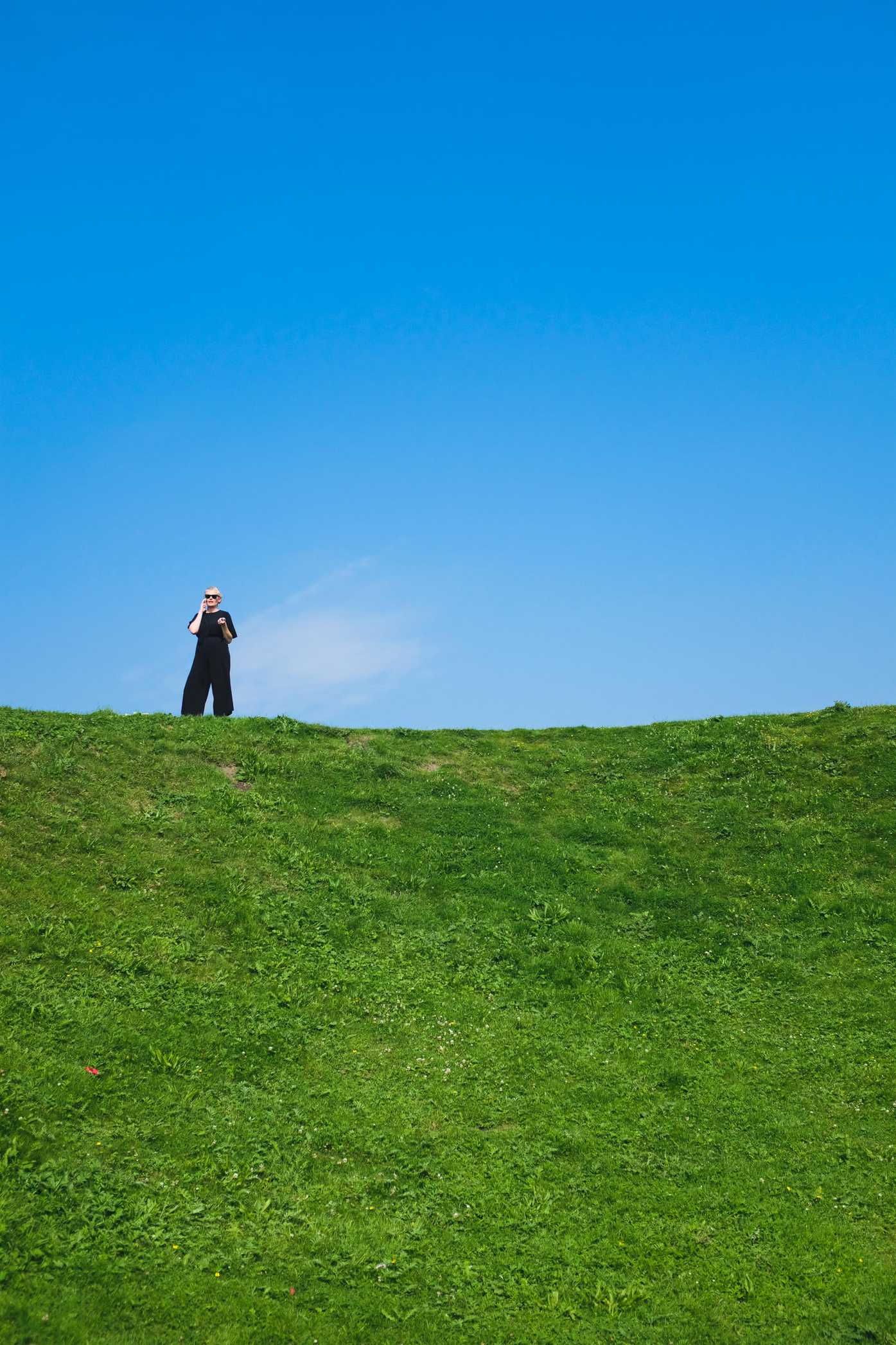 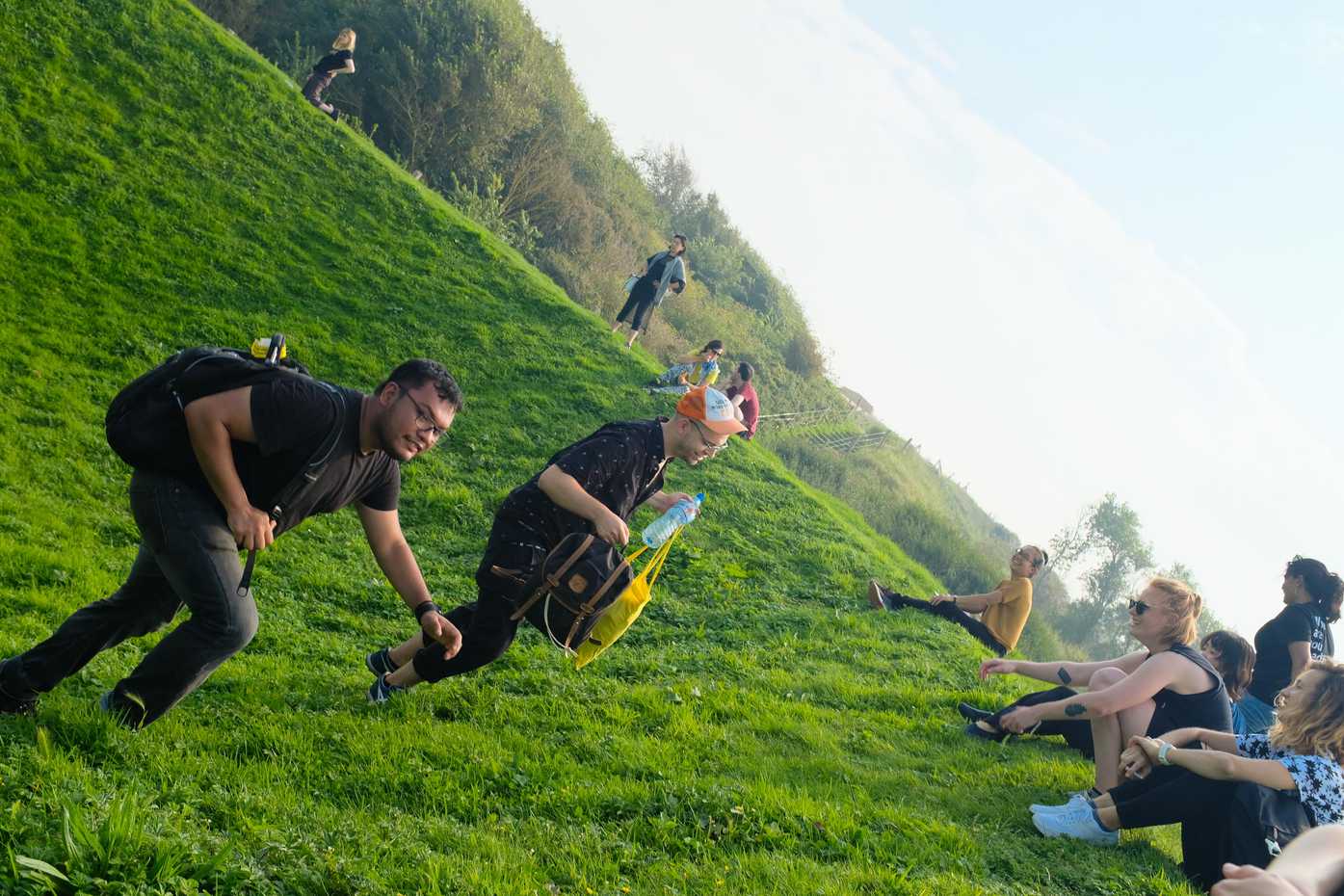 The sides of the bowl were super steep, but the view from the top was well worth it. 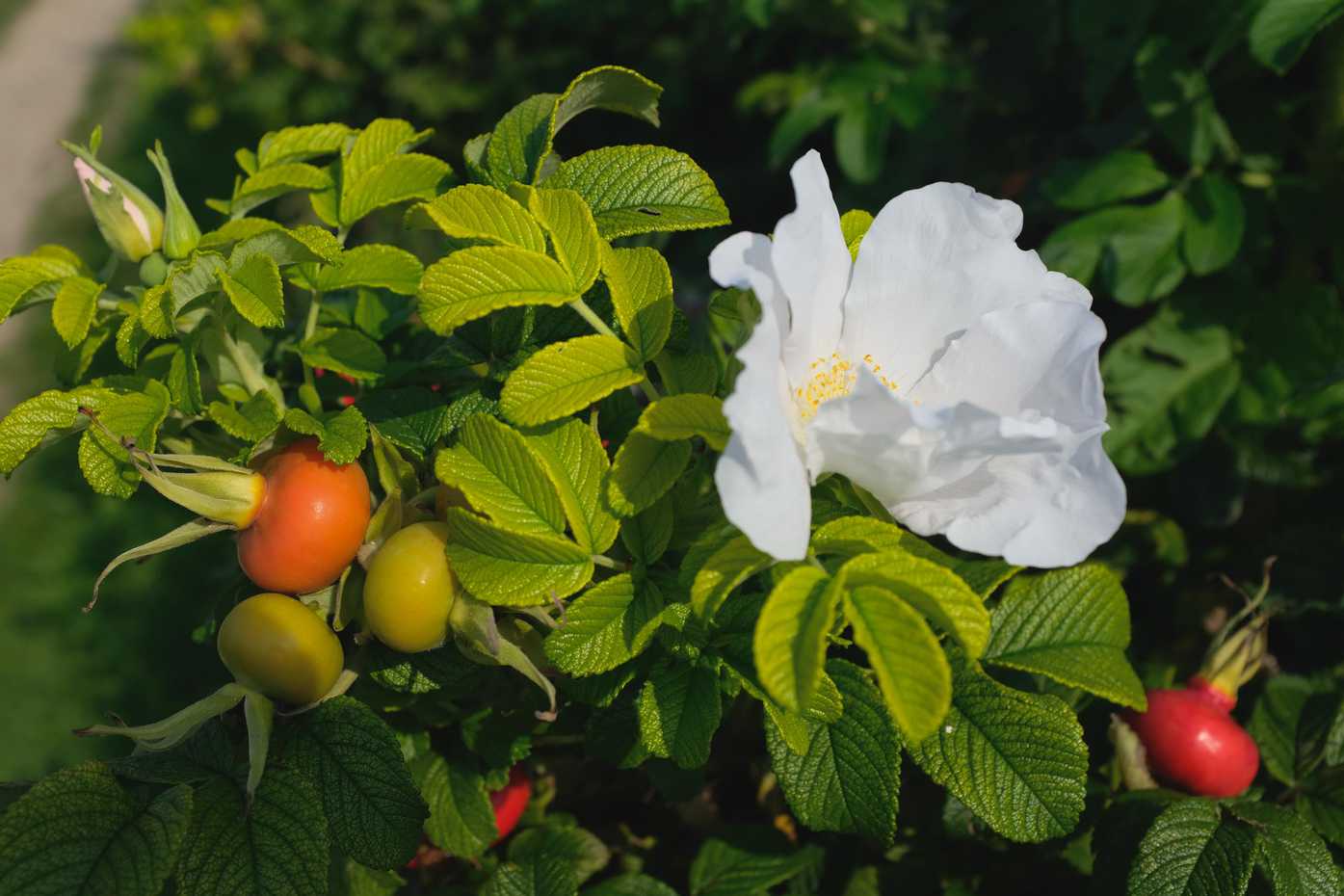 Wild roses surrounded the outside of the dome.

On Wednesday, we were able to go attend some workshop training sessions. I love the idea of making things out of metal, so I jumped at the chance to learn about the KABK metal shop. It is fascinating to see the ingenious tools that have been devised to precisely bend, cut, and weld metals – some of them are really simple, but a wonderful show of how effective a force leverage can be. Our guide to the workshop was Édouard, whose thick, mumbly, British-sounding Dutch accent was endearing but took some getting used to. He was entertaining and humorous, and I’m really grateful to be in a school with workshop attendants like Édouard, who are both deeply knowledgable and happy to empower students to work on their own.

Showing how a sharp metal pencil is the most effective way to mark a sheet of metal. 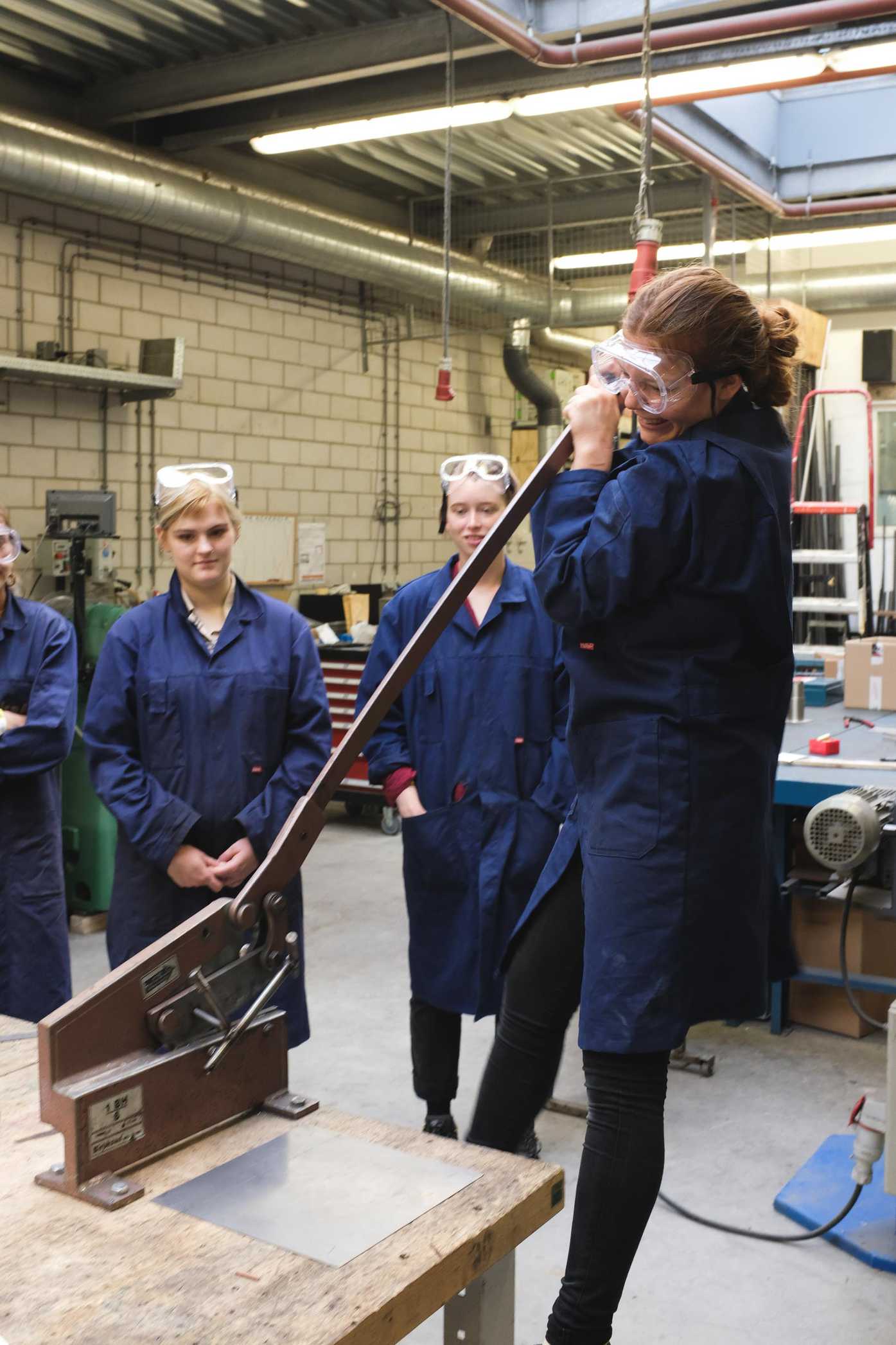 Jumping to get enough leverage to cut a steel rod. 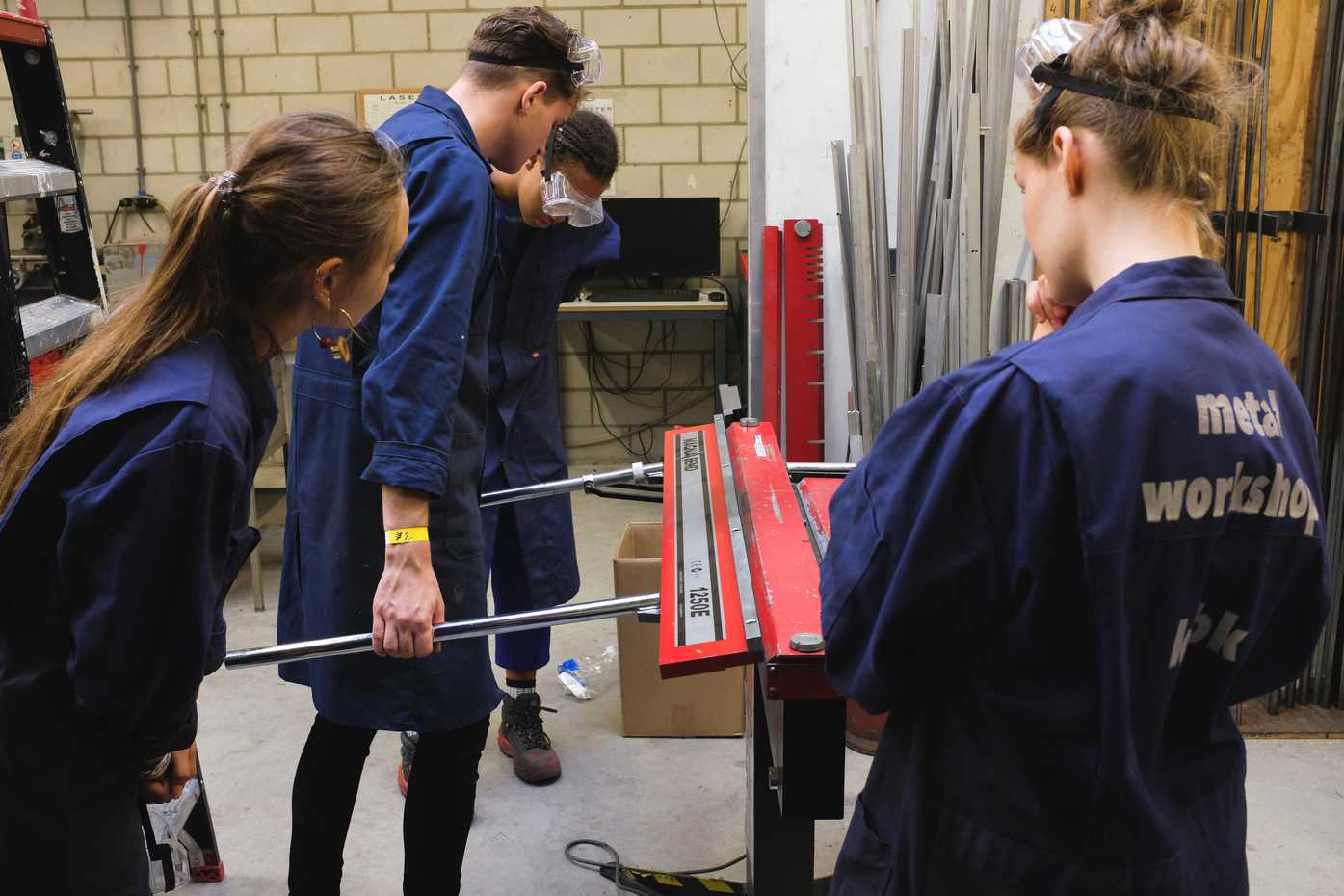 Shaping a box in a sheet-metal bending tool. 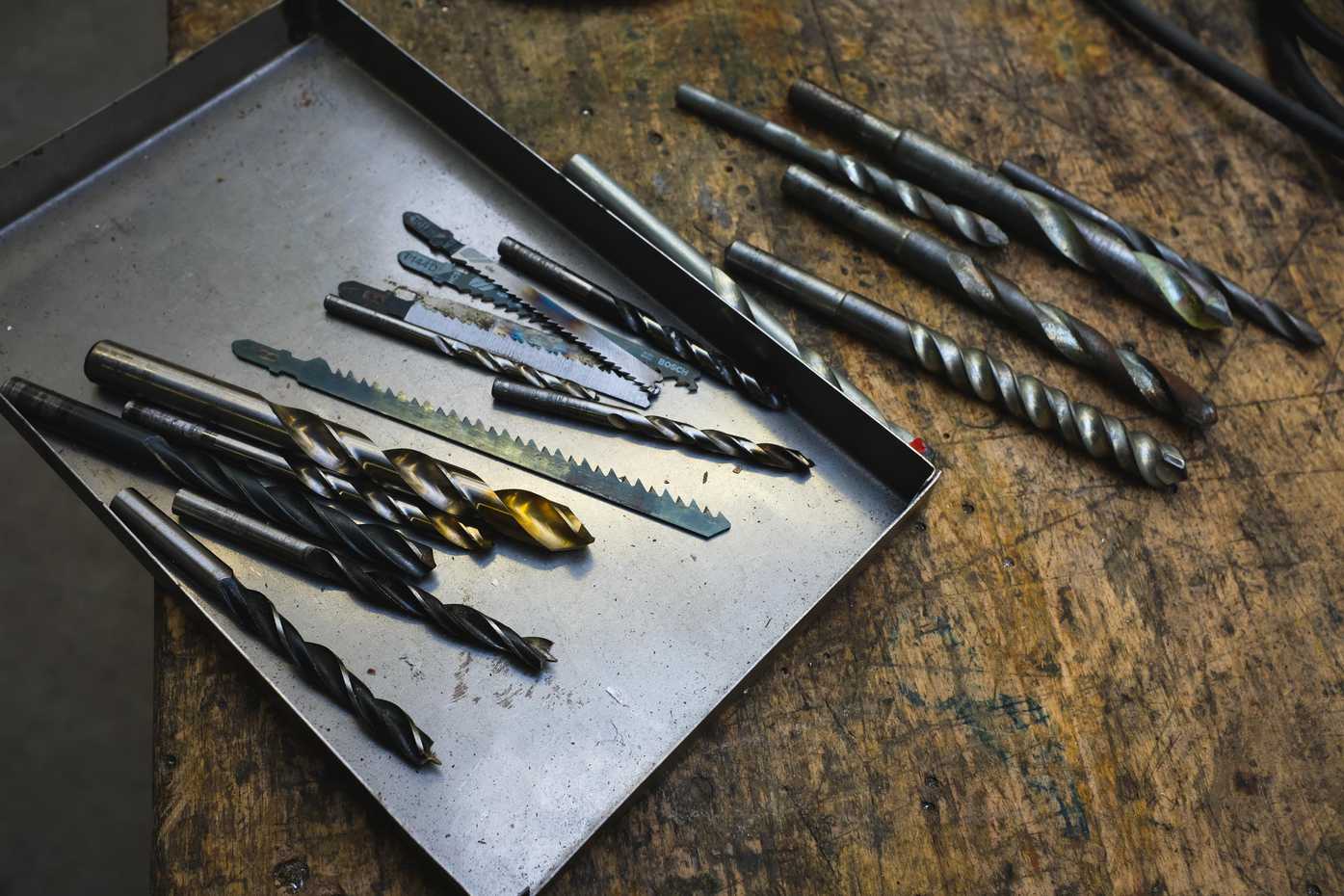 Édouard helpfully explained the differences between drill bits for metal, wood, and stone. 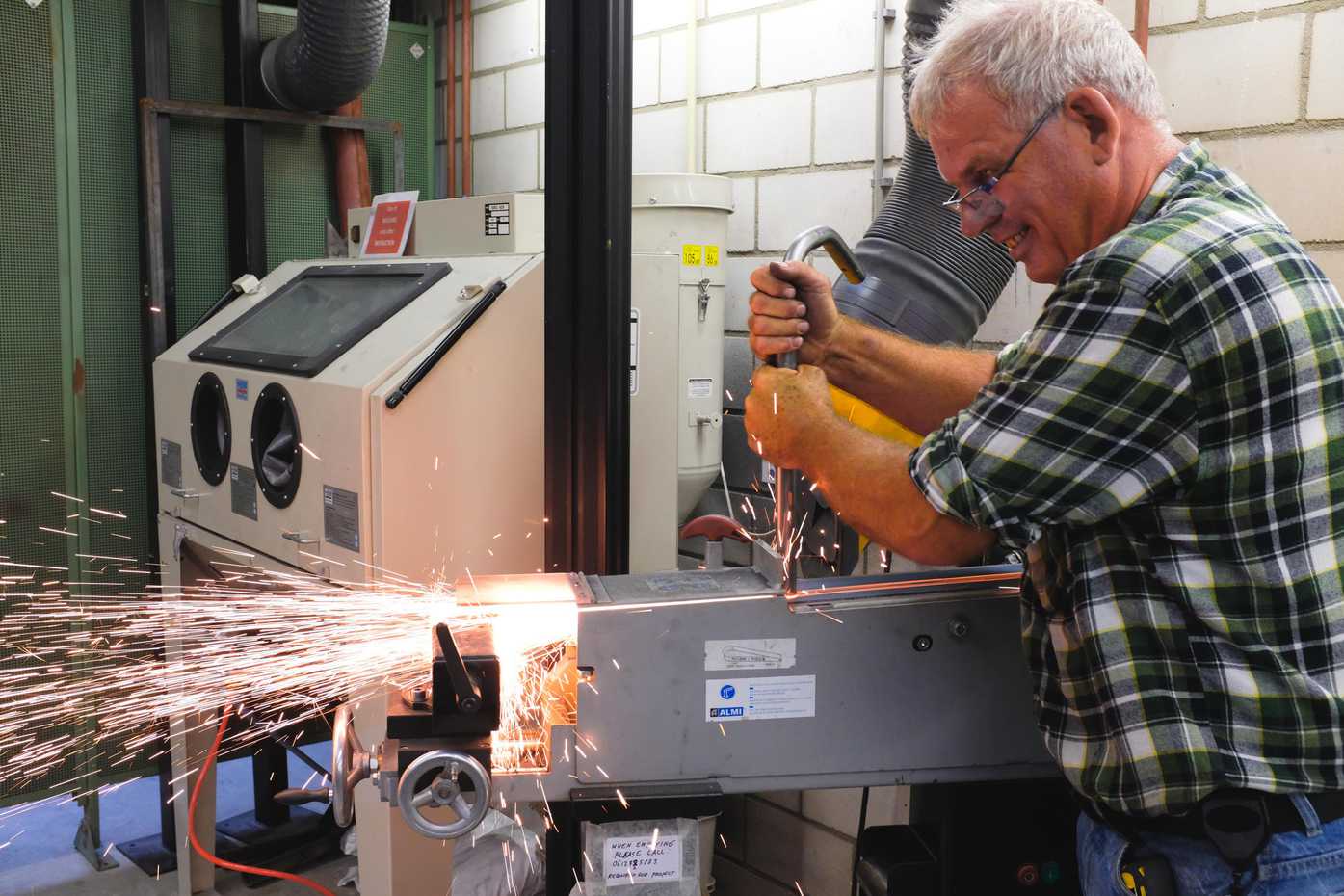 Just before this photo, Édouard encouraged me to line up the shot for “fireworks.” He also put on a pretty good devilish face, here.

I tried to take a risography workshop, but they weren’t running it that day, and instead placed me as the one student in a drypoint etching workshop. I hadn’t tried this before, so it was fun! I’ve always wondered what the huge printmaking machines were used for in art schools, so I was glad to try them out. A funny coincidence is that this printmaking studio is right next to the 3D-printing lab, so I got to feel a bit of envy towards students working on 3D modeling with Google Cardboards (and they may have felt envy at me for cutting up and printing from a plastic block). 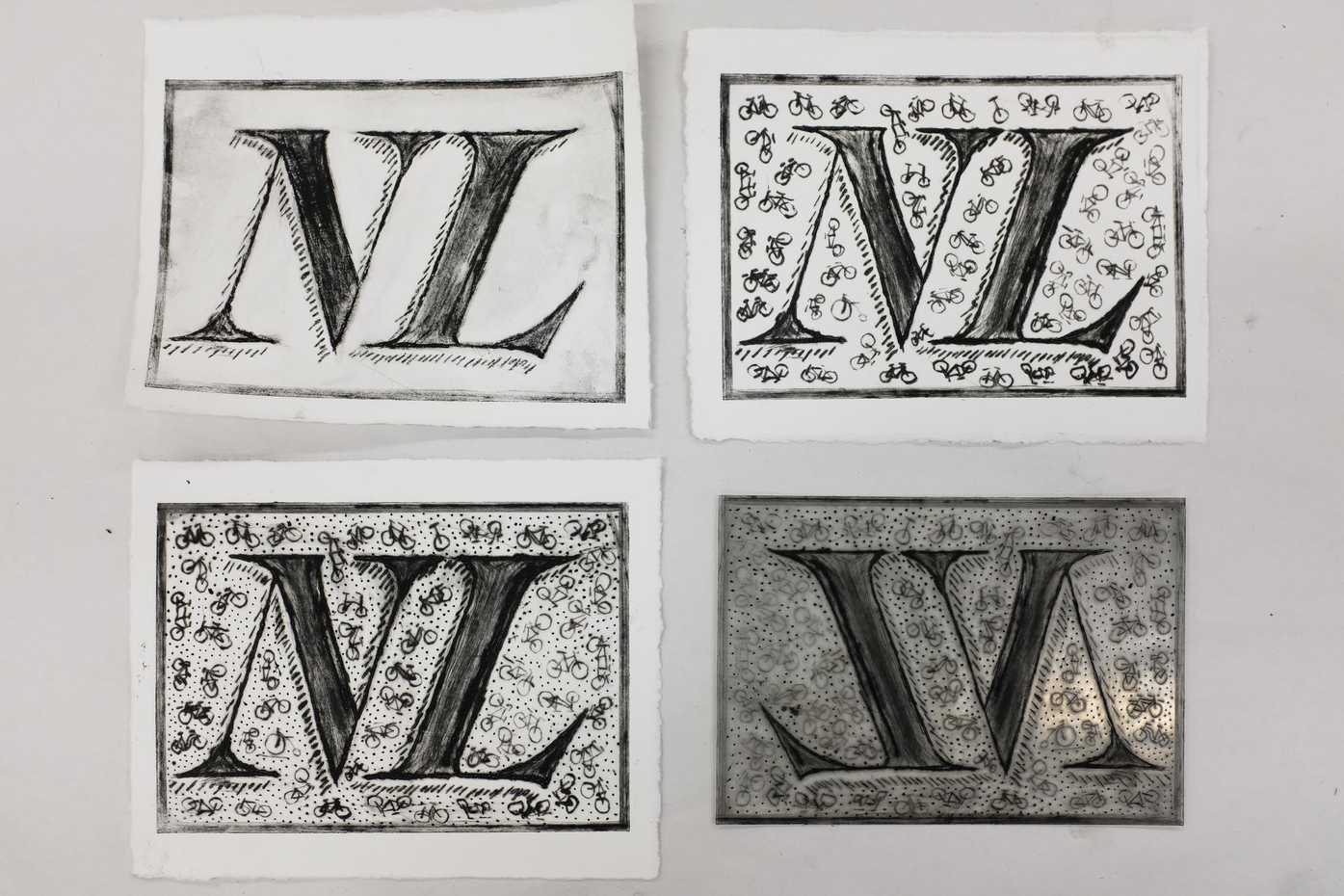 In drypoint printing, you can change the printing etching between each print run. So, here is “NL”, in various stages of decoration. 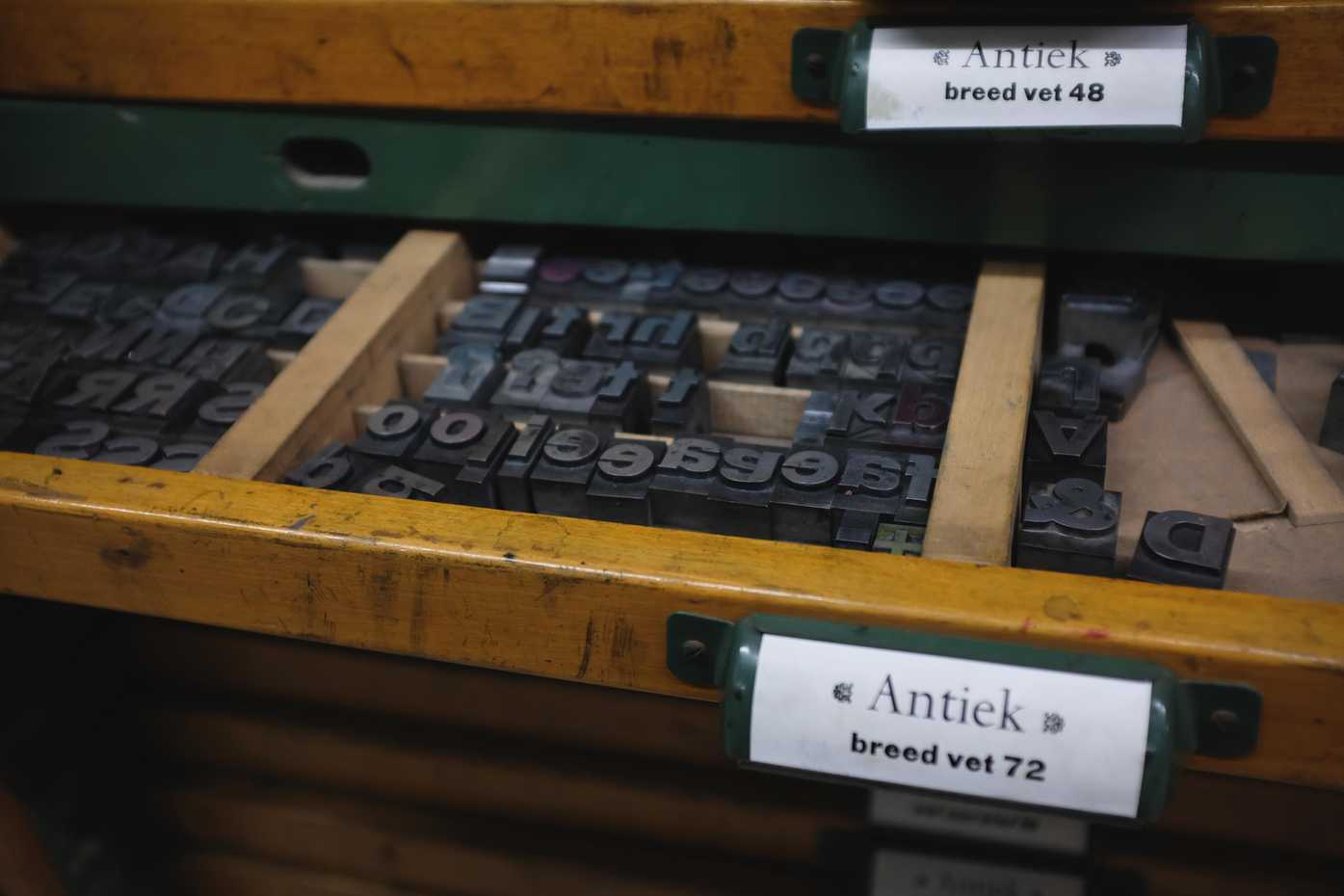 Several of my classmates opted to do a letterpress workshop, so I ducked in to ogle at the lead type. I’m excited to try this grotesque, which is a bit like a hybrid of Helvetica and Franklin Gothic.

I can’t wait to experience more at KABK. Thanks for reading about a few of the initial adventures!