Some highlights of Den Haag, so far

It’s hard to believe, but I’ve already been in Den Haag for almost three weeks. Yes, it’s called “The Hague,” in English, but the Dutch “Den Haag” sounds so much nicer to me and is obviously what people call it here, so I try to call it that, too.

In that time, I’ve been figuring out to live in another country as far as the basics like food and transportation go, and I’ve also had the chance to do a bit of exploring, beyond just finding essentials. I’ve tried to take photos on most days, and in this time, I’ve captured a few images that I like especially. Some of these, of course, are included in posts specific to the TypeMedia program I am entering, but the rest offer a few glimpses of what life is like in Den Haag. I could string it into a properly coherent narrative, but instead, I’ll show a few photos I like, in chronological order, and add details where interesting. 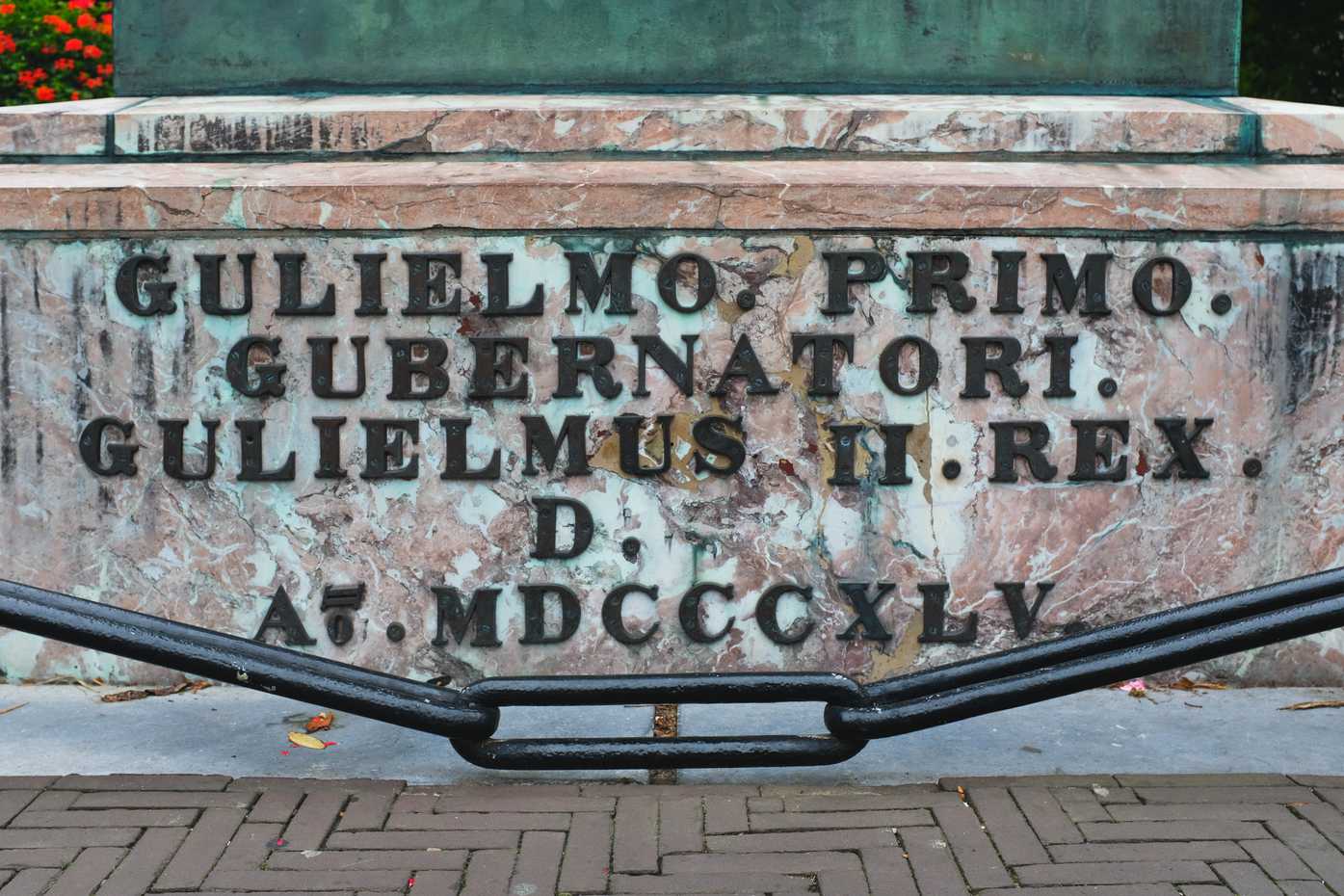 I love the letters present on monuments, and Den Haag has some especially lovely examples of this. This particular statue is one of two in this city of Willem van Oranje. From Wikipedia:

William I, Prince of Orange (24 April 1533 – 10 July 1584), also widely known as William the Silent or William the Taciturn (translated from Dutch: Willem de Zwijger), or more commonly known as William of Orange (Dutch: Willem van Oranje), was the main leader of the Dutch revolt against the Spanish Habsburgs that set off the Eighty Years’ War and resulted in the formal independence of the United Provinces in 1581. 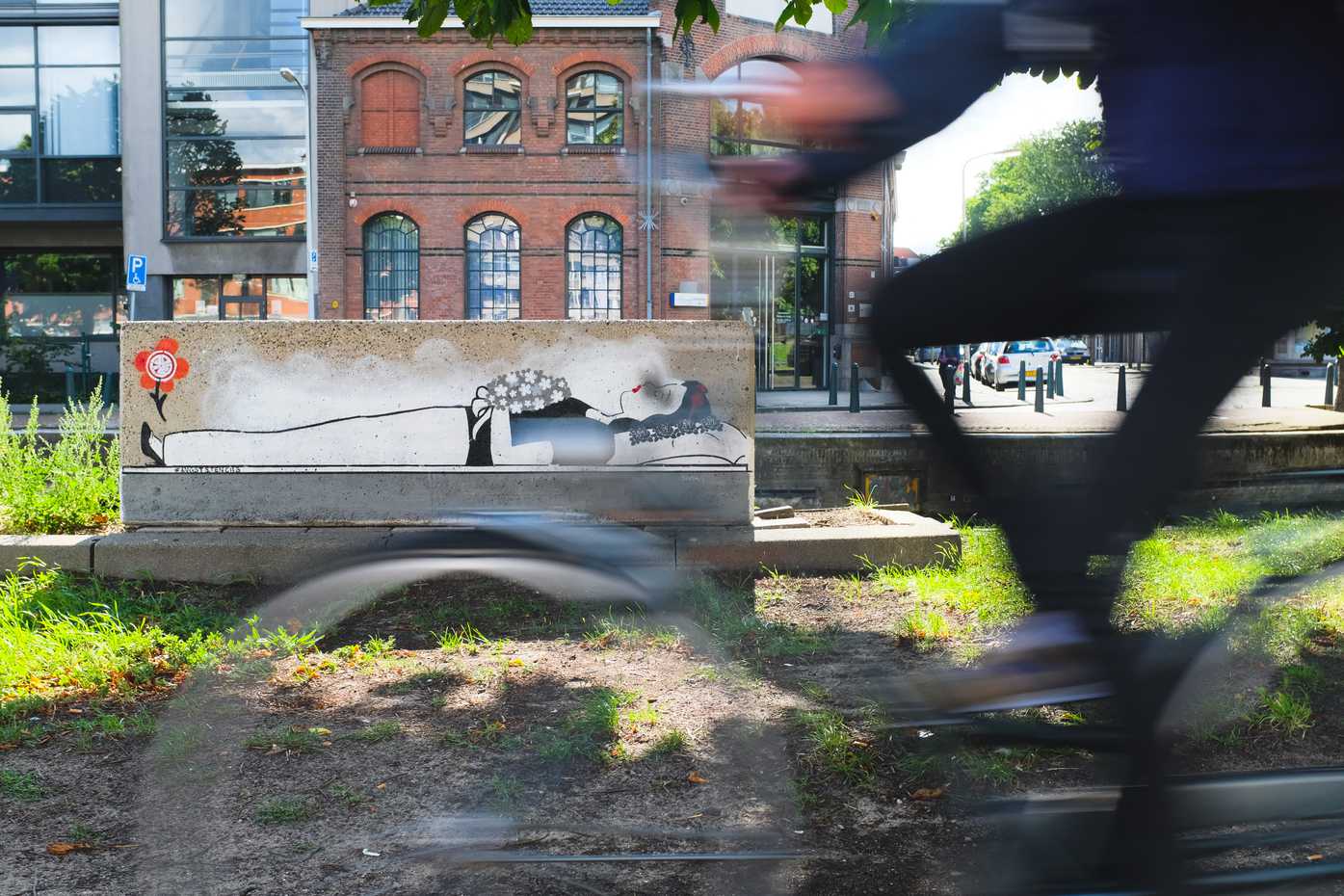 Like all the Dutch cities I’ve visited, Den Haag has an inspiring amount of bicyclists and bike lanes. Along this path, I spotted this lovely stenciling of sleeping beauty, on the side of a large concrete block. 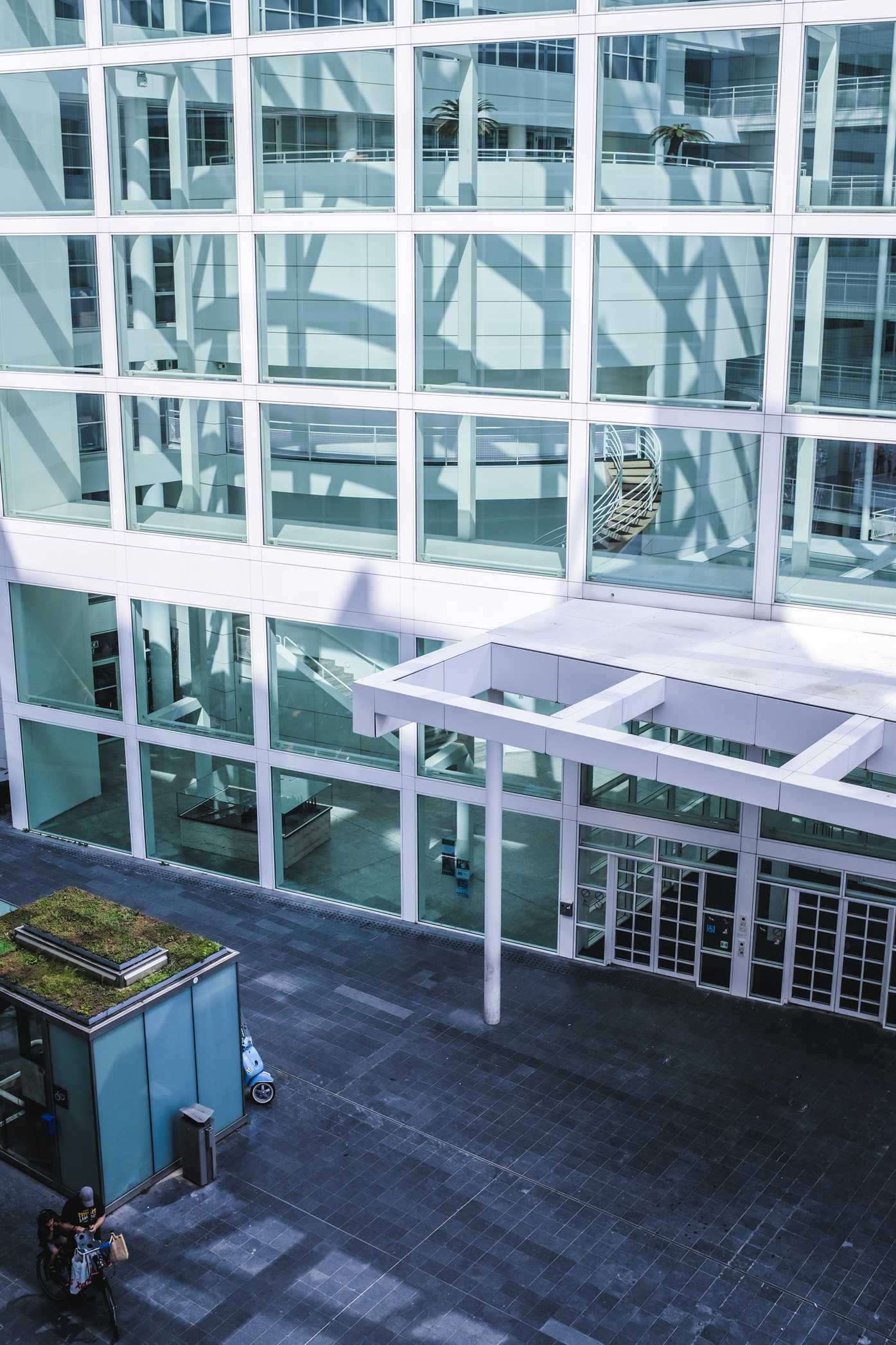 One day, I decided to visit the Den Haag Centrale Biliotheek. It is a wonderful library, with 6 floors that include a café, a work/study area take takes almost the entire 2nd floor, a large area dedicated to comics (I’ve learned that countries like The Netherlands, Belgium, and France tend to value comics much more than the US), plenty of magazines in both Dutch and English, and lots of old and new books besides that. While I was on Floor 6, the view of the Den Haag city hall, in an adjacent building, caught my eye. In the huge atrium, there was a large circular structure with palm trees on top. It’s frustrating to take photos through windows, but I noticed that the library had an inviting outdoor staircase. No one was on it that I could see, but I figured that most people are lazy, and would take the easier route of the escalators and elevators in the center of the library.

I pushed a green button to exit to the exterior staircase (exit buttons seem to be more common in Europe, though my office building in New York had them as well), and started taking a few photos of the city hall as well as of people in the square below. 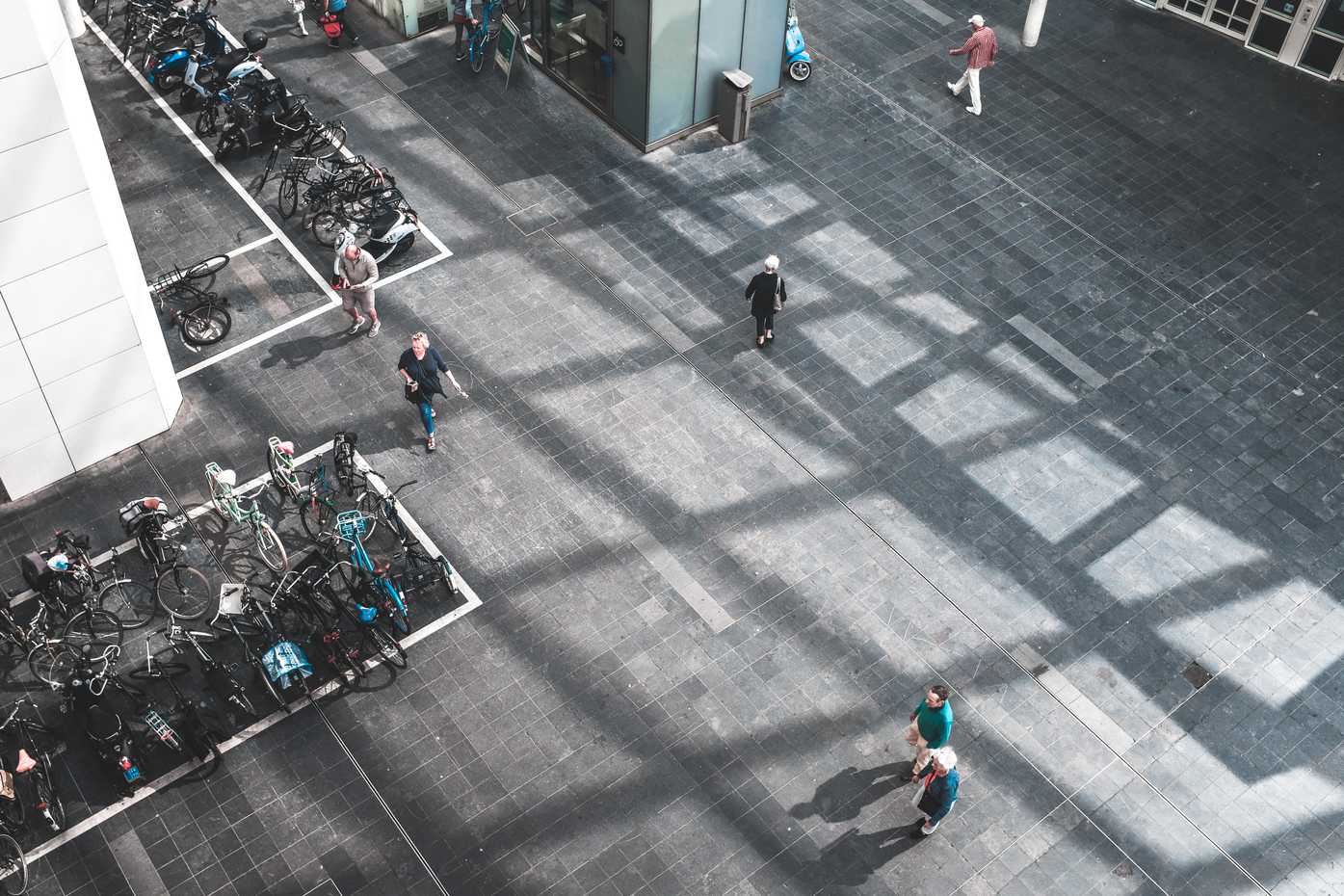 People look more interesting from above.

As usual, I was listening to a podcast while wandering around, so I was confused to hear a nearby voice, since I had seen no one else was on the staircase. Listening to it, it sounded like it was directed at me. I looked around, and saw a security guard in the door, beckoning grumpily for me to come towards him. In my hurry to be friendly and compliant, I hopped up some stairs towards him, tripped, and whacked my knee on the marble surface. Picking up my sunglasses and feeling foolish, I walked towards the guard more carefully. When I stepped inside, he asked me something in Dutch. “Sorry, I only speak English,” I apologized. “This is an emergency exit,” he snapped, pointing to the button that to him, made this obvious. Now, I am used to emergency exits shouting at you visually, with bright red colors, and all-caps, condensed fonts telling you things like, “EMERGENCY EXIT. USE ONLY IN THE EVENT THAT YOU ARE CURRENTLY ON FIRE.”

Another security guard joined us, and the first guard told me, “We need to escort you out of the building.” So, I was marched down six flights of escalators, and walked out the front doors under the watchful glare of both security guards, plus a third who had joined the effort to quell the anarchy I had caused in this public building. My knee (and my pride) felt the sting of this for a couple of days.

I have been starting to understand that the Dutch like things to be organized. This societal drive for order is probably part of the reason that they have such great type design, so I’ll just have to learn to appreciate it – and check signs more carefully with Google Translate, next time I’m unsure. 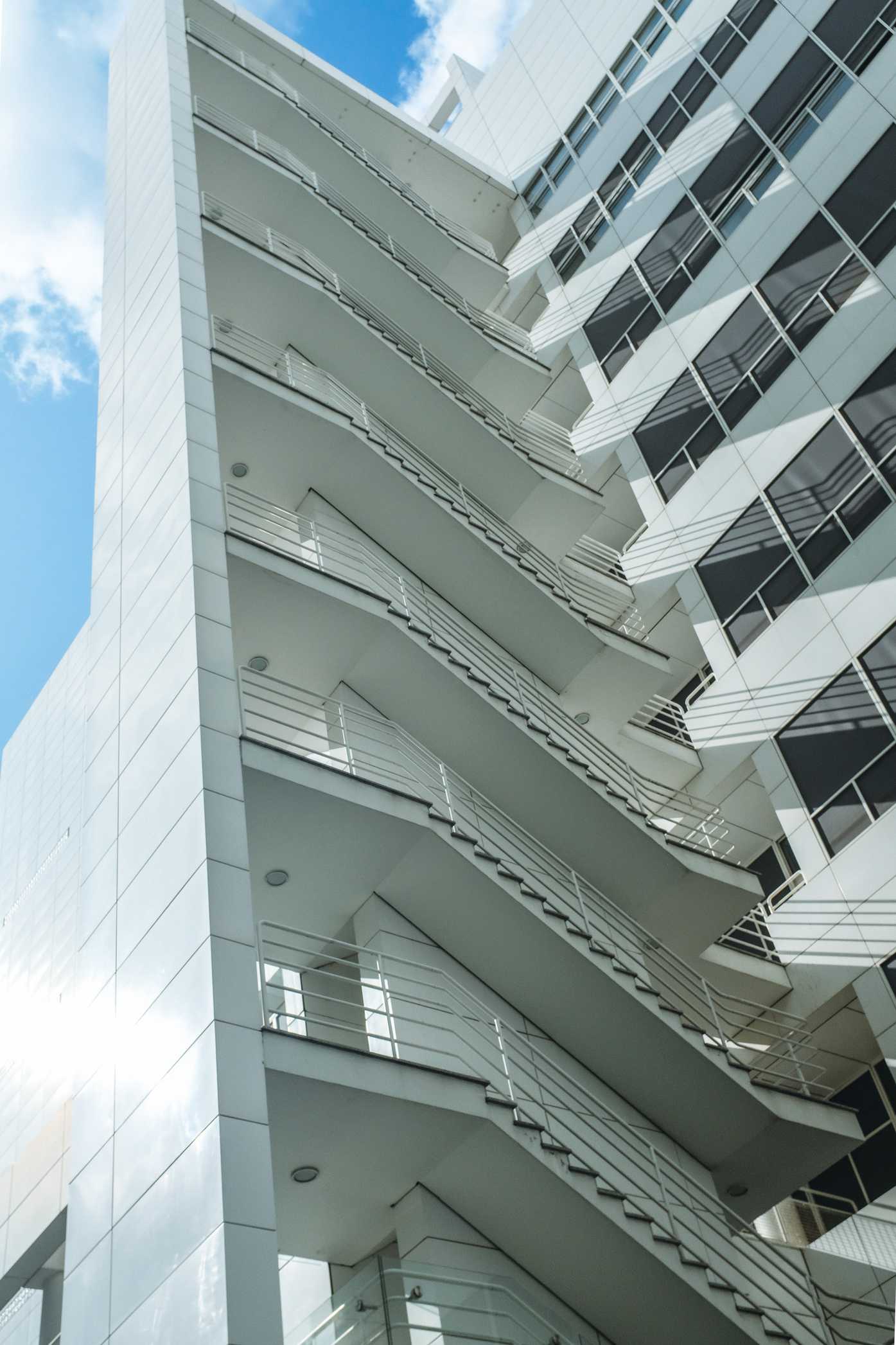 The exterior (emergency) stairs at the Den Haag Centrale Biliotheek 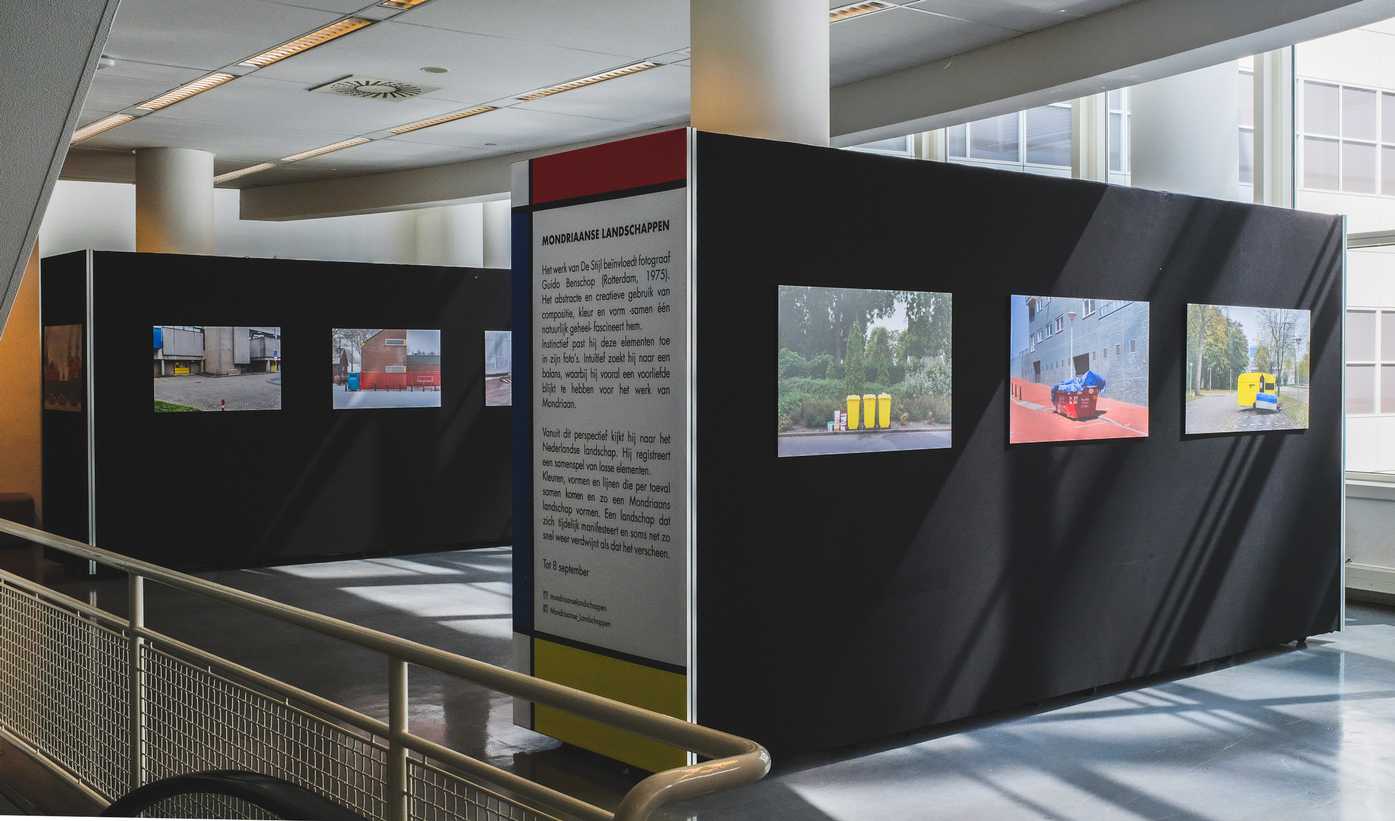 One thing inside the library was a small photography exhibition on “Modrian” compositions found in landscapes.

Something the Dutch love is the artwork of Piet Mondrian, who was born in Amersfoort, NL, and became one of the principle artists of the De Stijl movement.

Today, walking around Den Haag you will see large-scale decorations based on Mondrian’s De Stijl artwork popping up all over. Interestingly, though Den Haag is not constitutionally the capital of the Netherlands (that’s Amsterdam), it does hold the Dutch government, parliament, the Supreme Court, and the Council of State, and is where King Willem-Alexander and Queen Máxima have two of their three palaces. So, it is basically the capital of the Netherlands, and this likely drives it as being a place where they celebrate their national heritage most, including by celebrating the art of Mondrian. 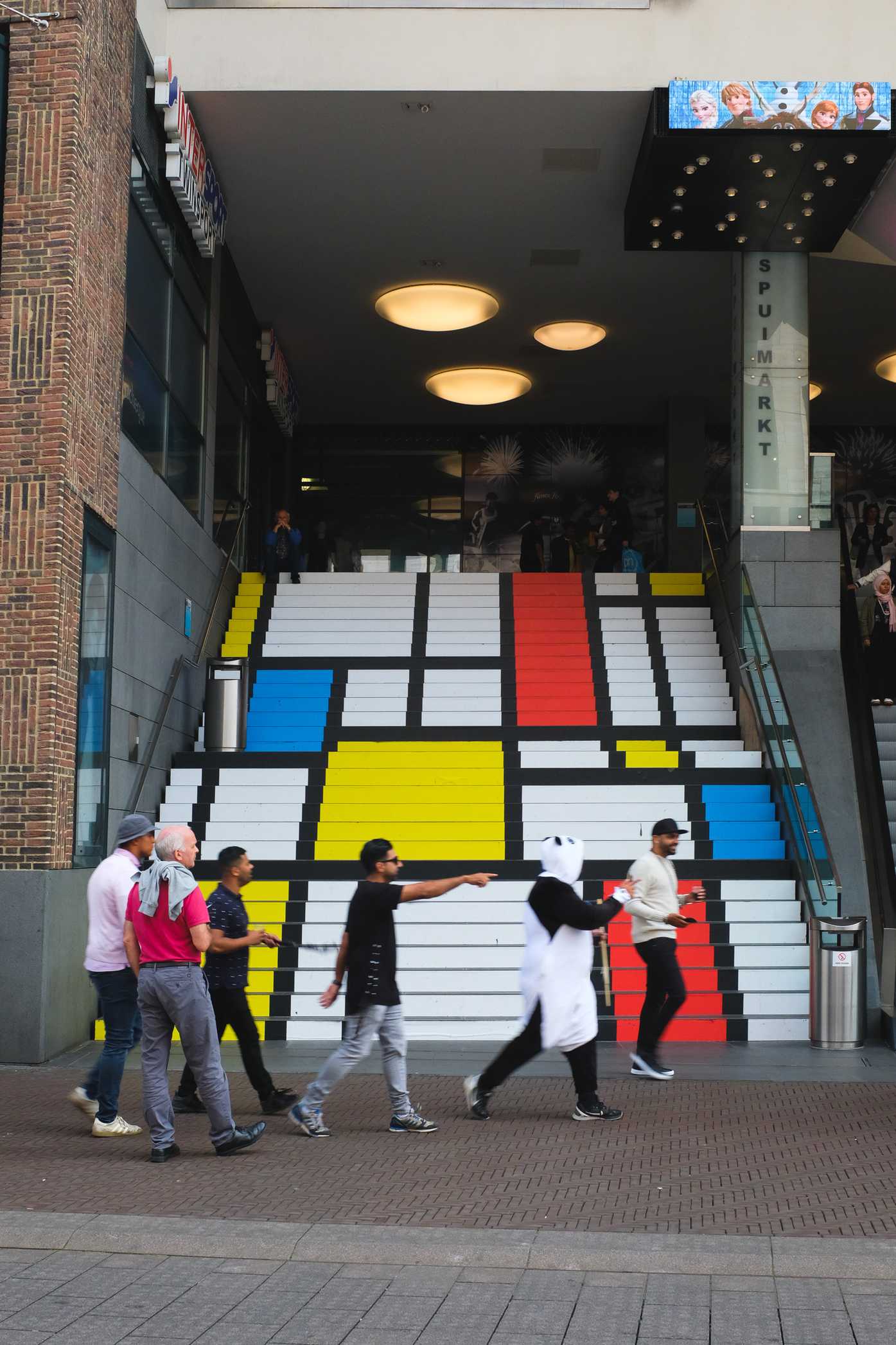 Like the famous psychological experiment of The Invisible Guerilla, I didn’t realize that the scene above included a panda until going through a batch of photos, days later. 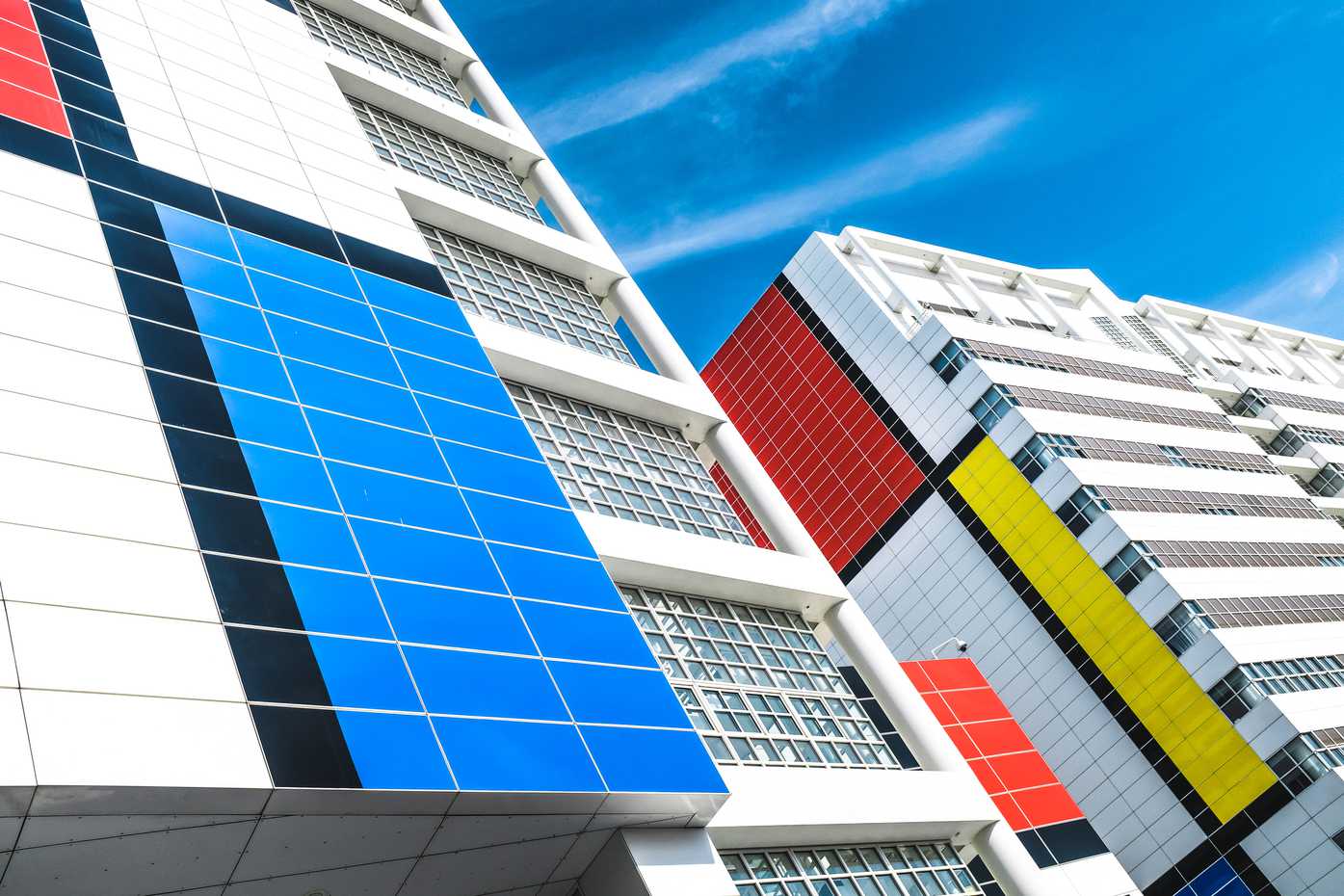 Den Haag has brilliant colors, beyond the Mondrian decorations. 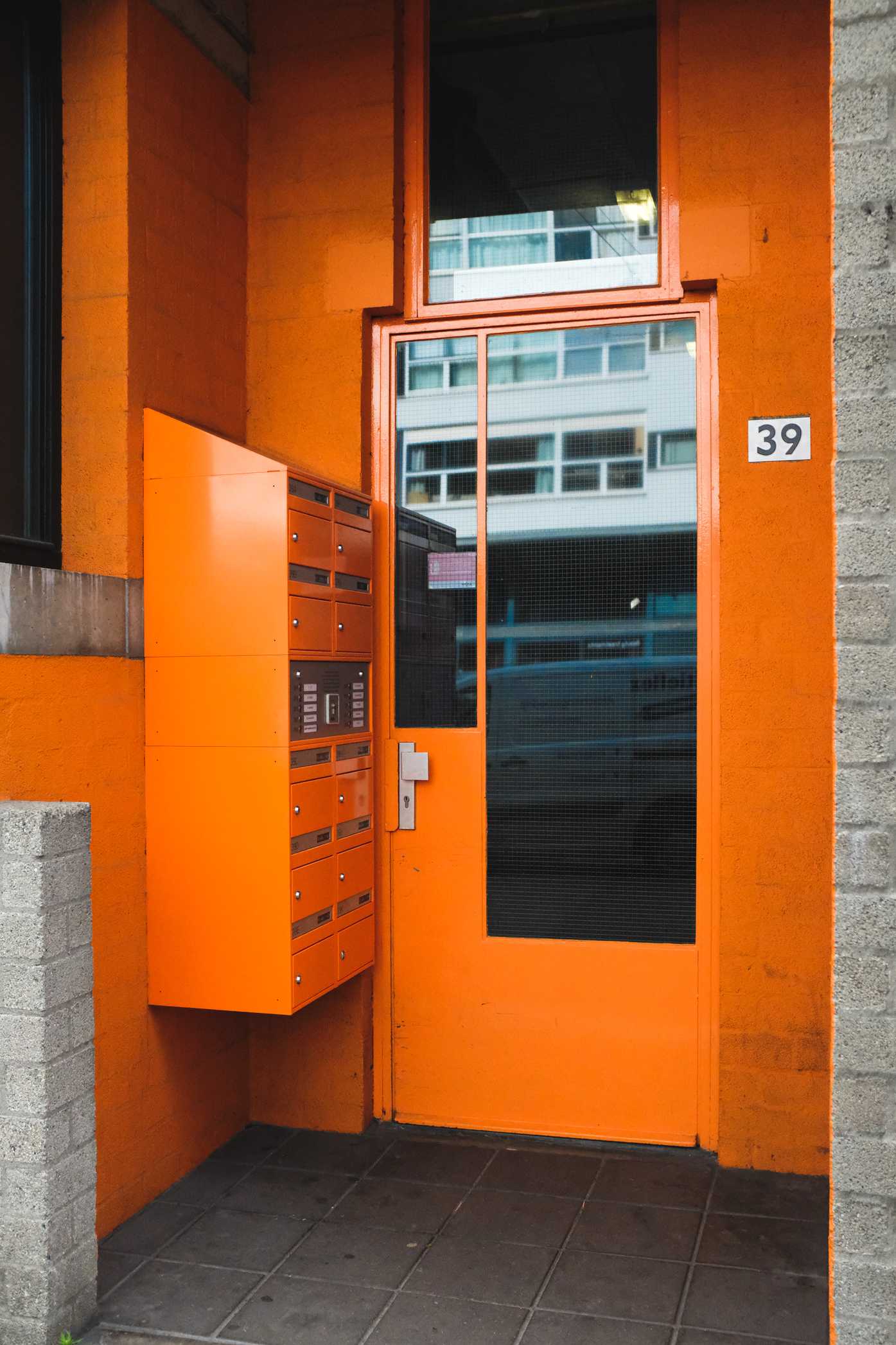 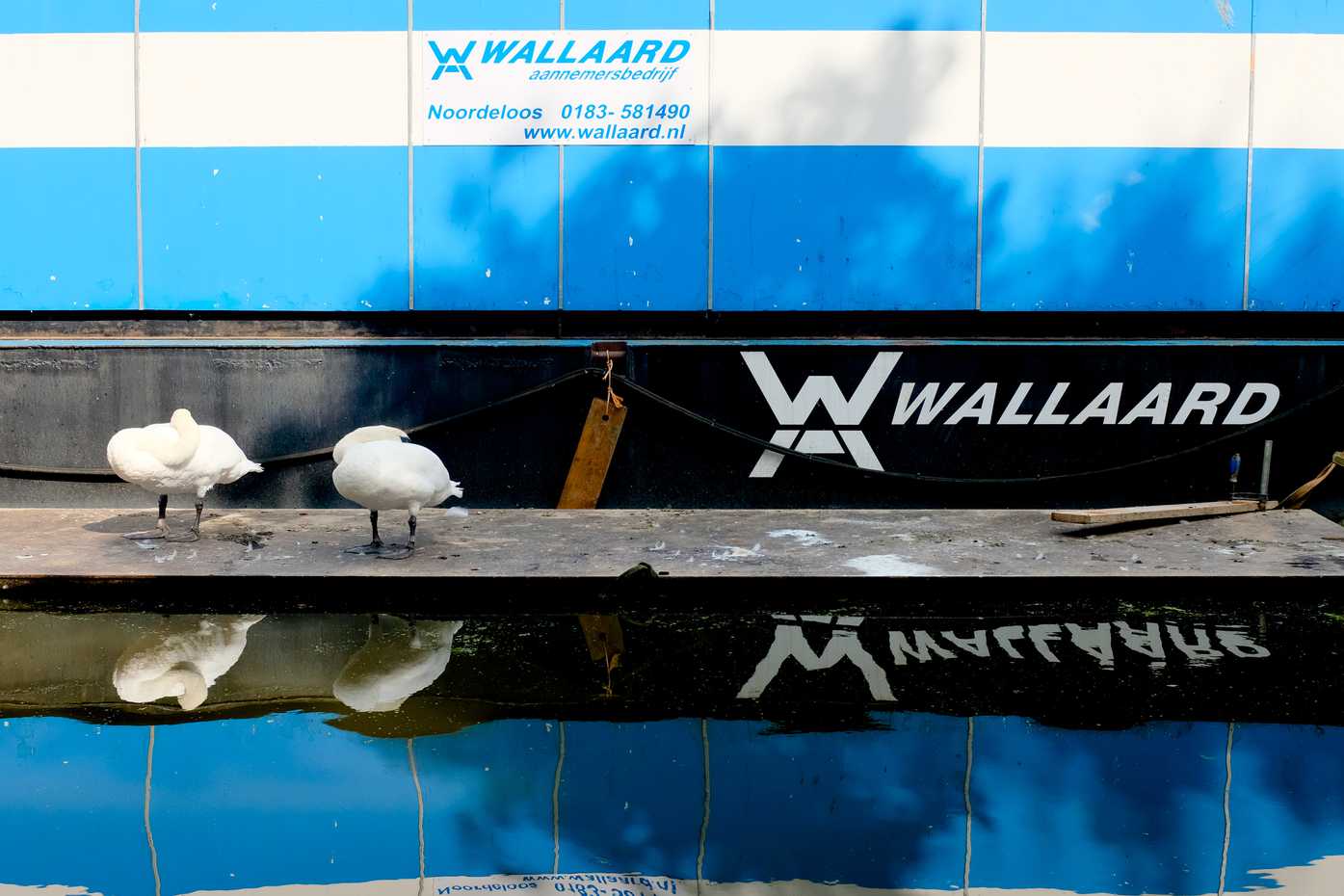 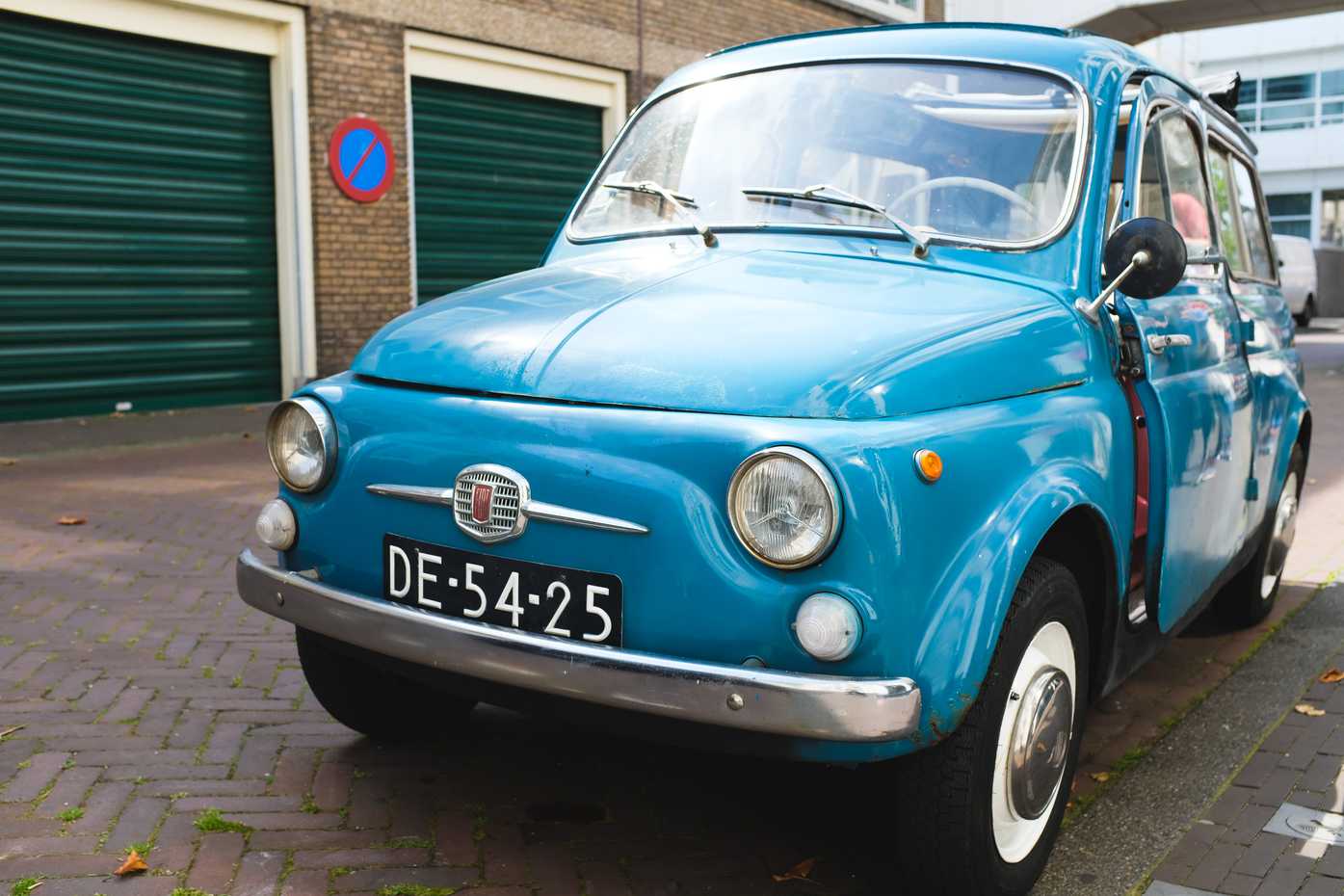 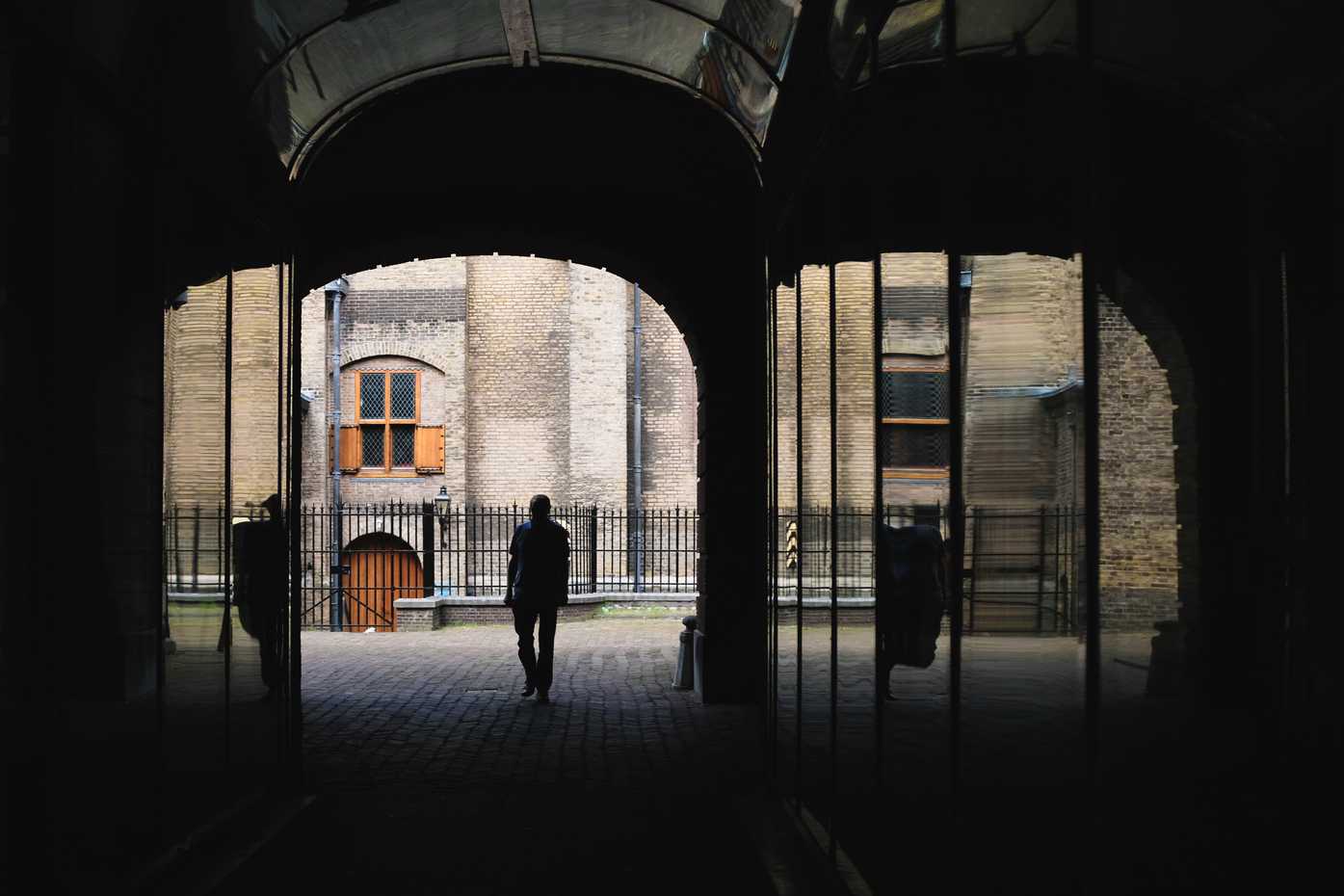 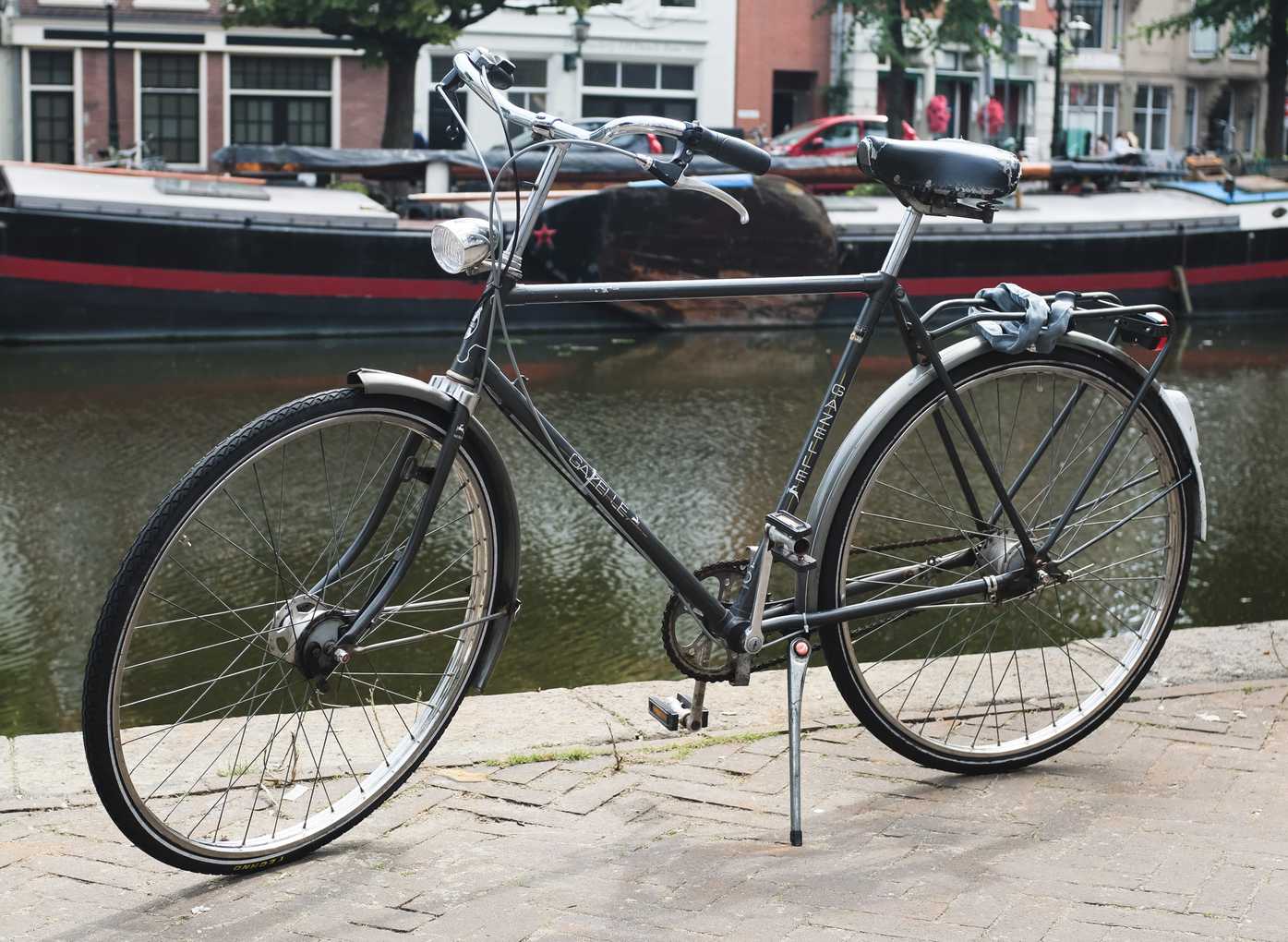 I found a used bike! It was 80€, and I’ve already been getting plenty of use out of it. I’m not used to riding a bike with such a leaned-back geometry, however, so my weight falls on the seat more than I’m used to. So, I won’t be biking between cities much until I can figure out the right seat for a leaned-back bike. 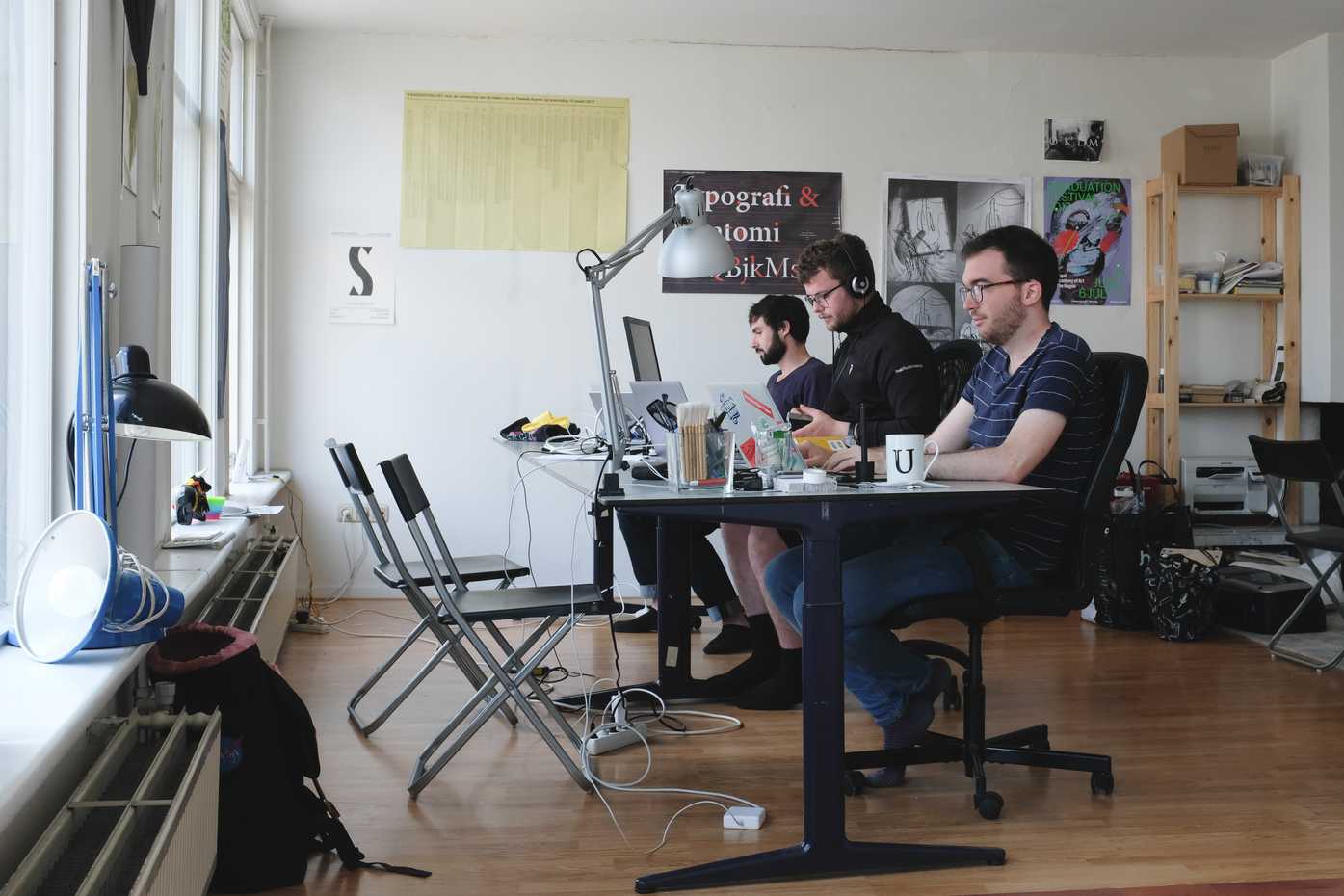 Here’s me and my roommates, Seán and Carlos, working in our living room. 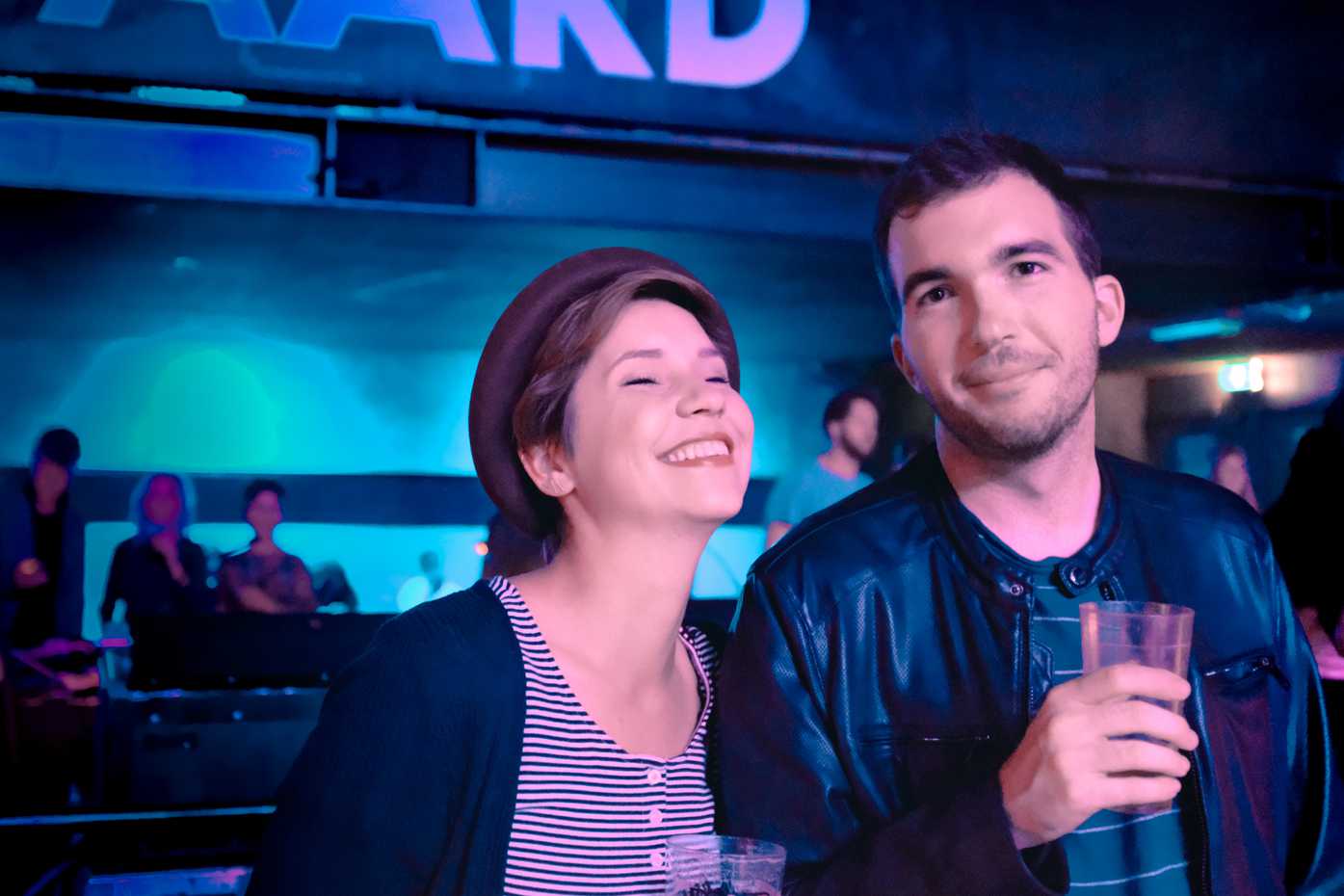 On a recent Saturday night, I joined a group of classmates, including Mona and Carlos, pictured above, to attend an opening festival for a local music venue, Paard (fun fact, paard means “horse” in English). This venue is amazingly good. It has a big room (though, not too big – maybe just slightly smaller than First Avenue, in Minneapolis), a smaller room (maybe half the size), and a “Café,” which was an intimate bar with a smaller stage on one end. 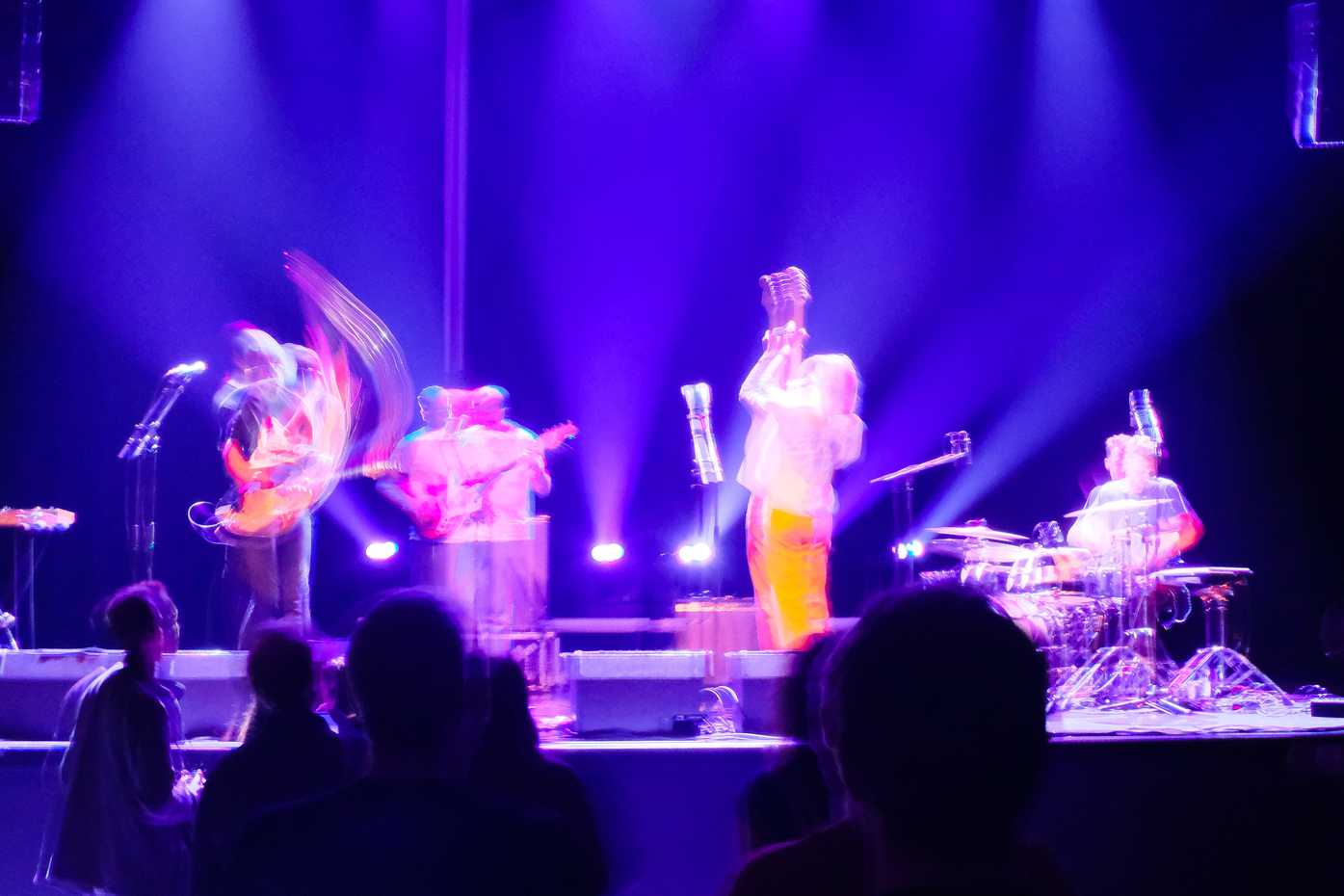 The main act that drew us to this music festival was Amber Arcades, a chill indie rock group. They put on a solid show, and it was a great warm-up for the night. 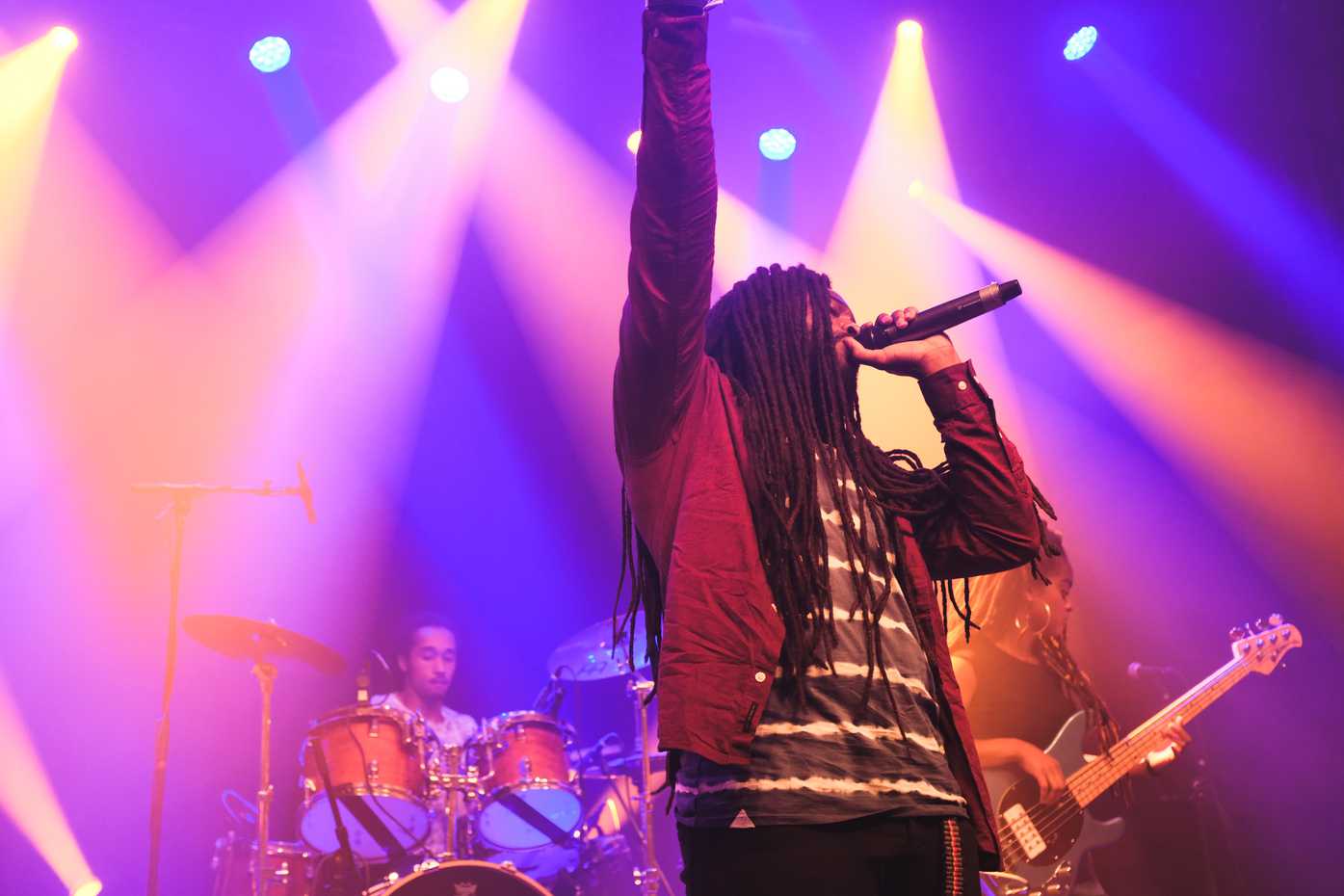 The Dubbeez, a raggae / hip-hop group, were super entertaining and really solid musicians. They were a blast to watch. 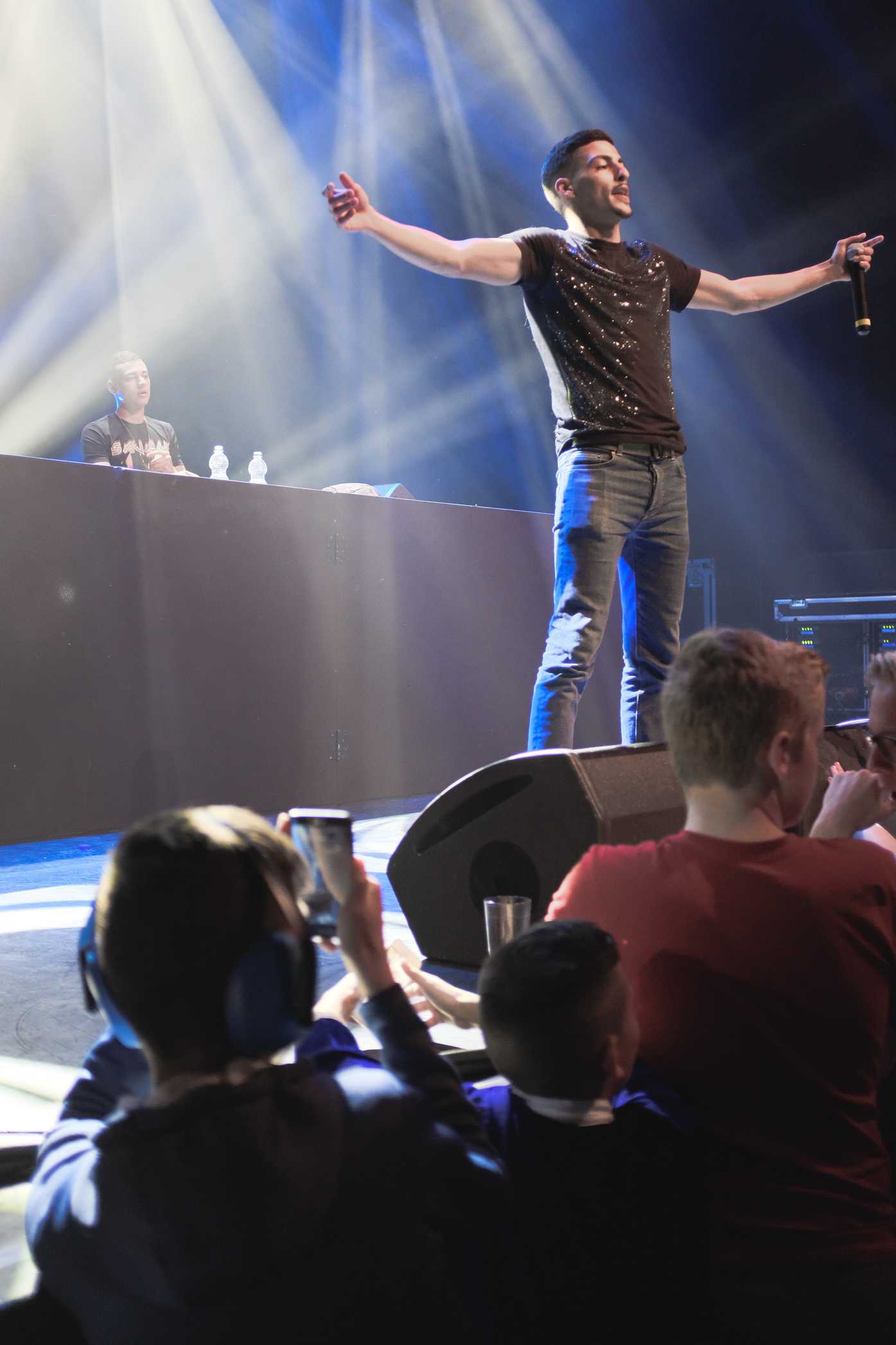 A fun diversion was Boef, who was a bit like a Dutch version of Drake. He definitely drew the biggest crowd of the night. 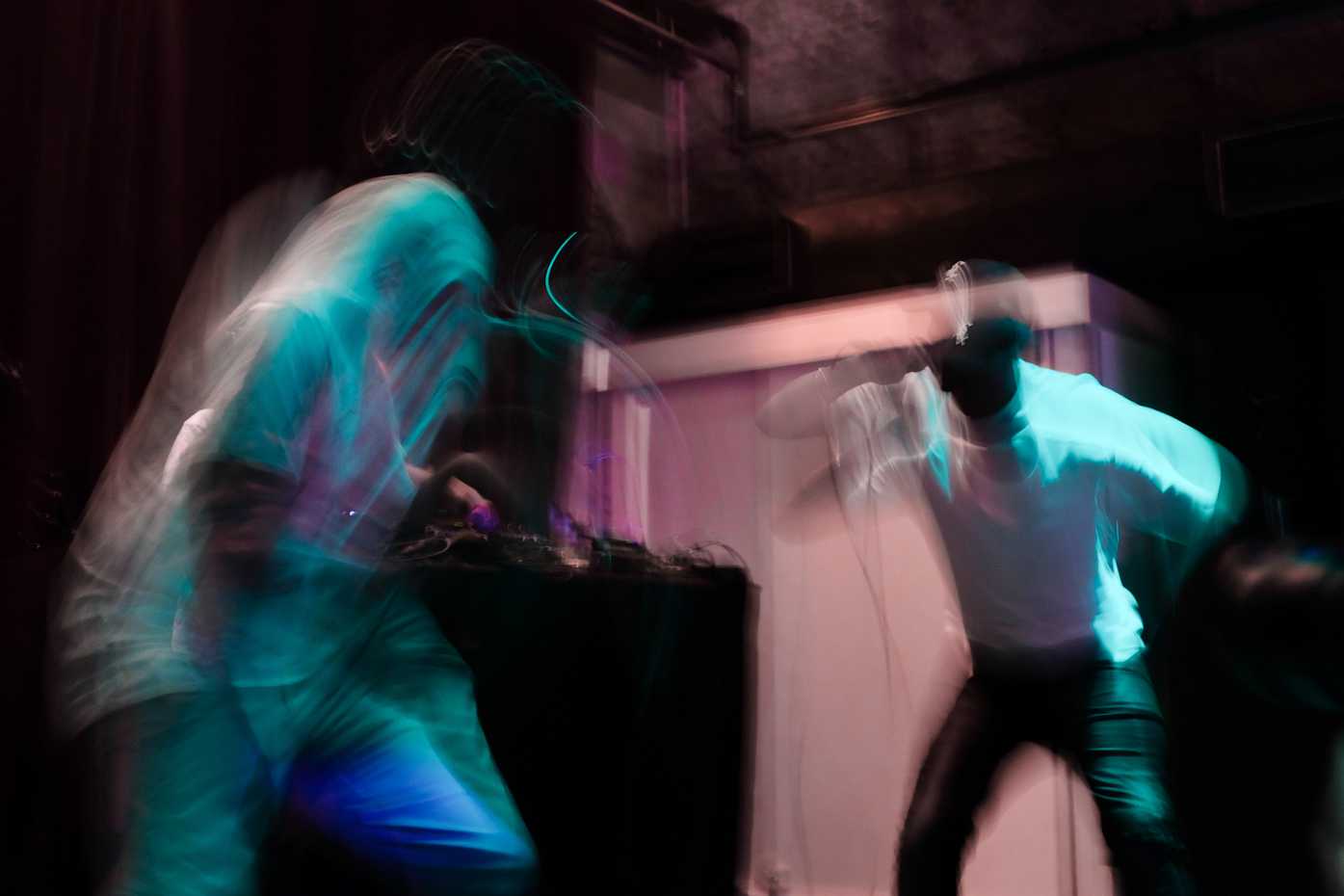 My favorite group of the night was Brandwerk, who played in the Café. The two rappers and DJ were animated and had a really tight delivery, all in Dutch. I basically stumbled across this when I took a breather from a dance party happening in another part of the venue, and it was awesome to see. 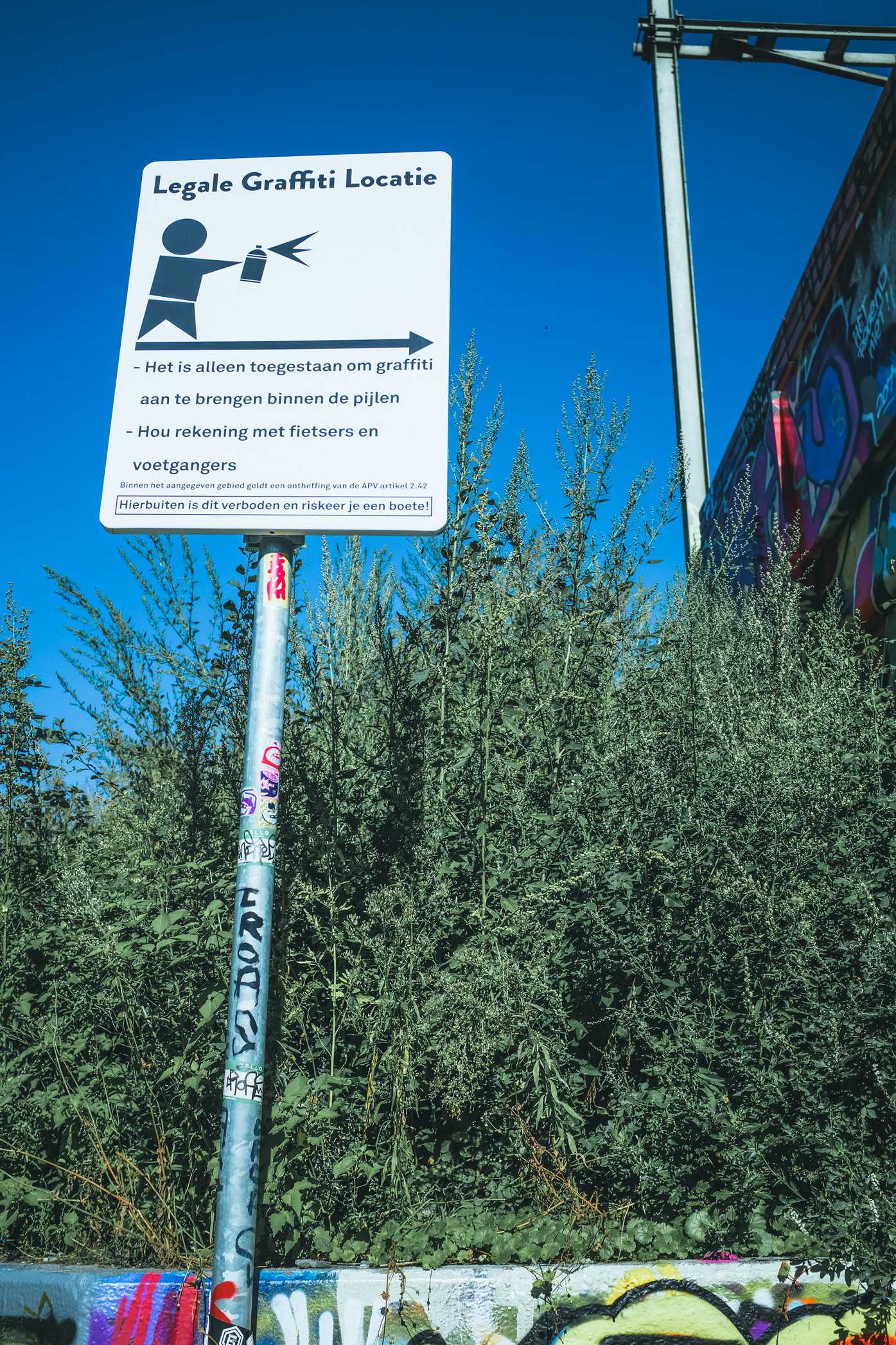 Another fun outing was during the day, joining my roommate Seán to hang out with a group of painters who were painting a legal graffiti wall. It was a chill time, and they were just there waiting for a dance party that evening, socialize, and experiment. 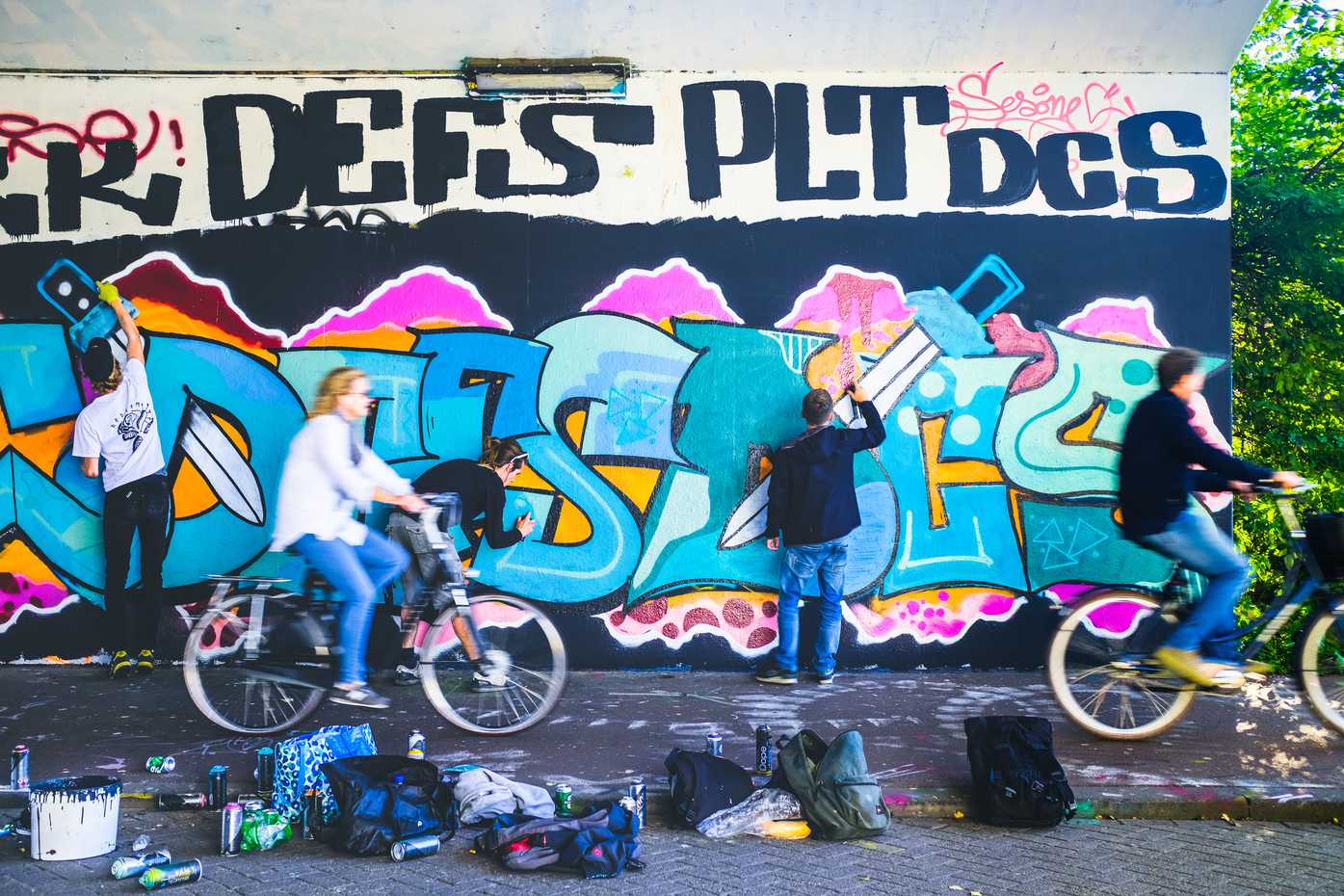 On the other side of the same underpass, a slightly older painter was making a really impressive work. It was crazy vibrant, had some surprising and cool details like gradients you only saw once your looked closer, and “smoke” in the background with shading that gave it a dimensional look. 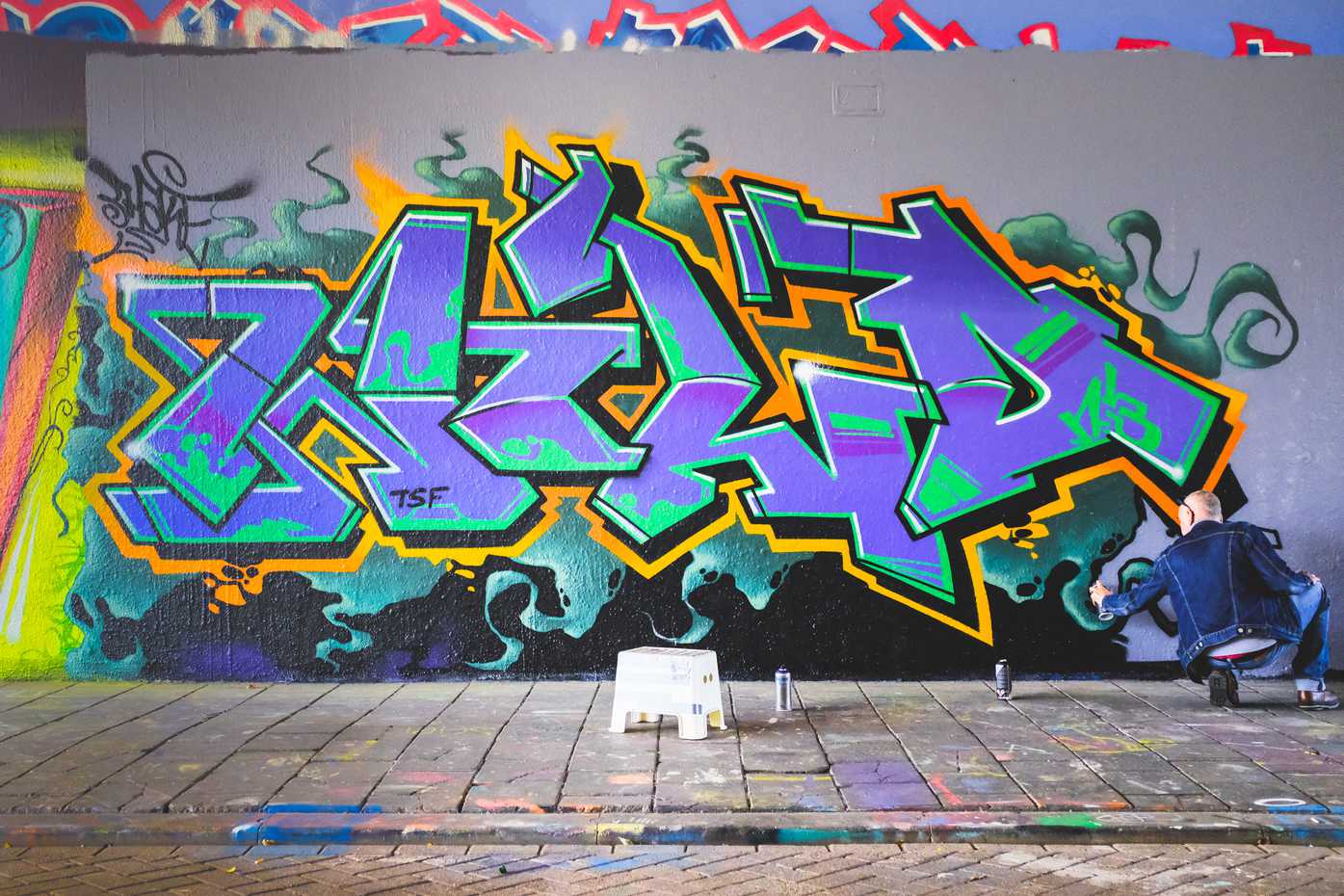